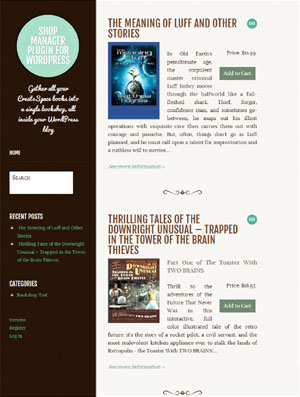 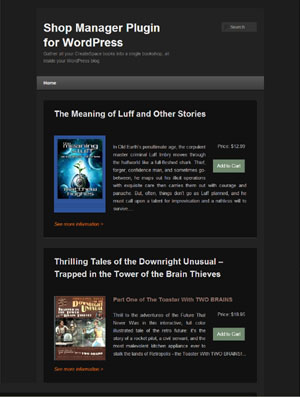 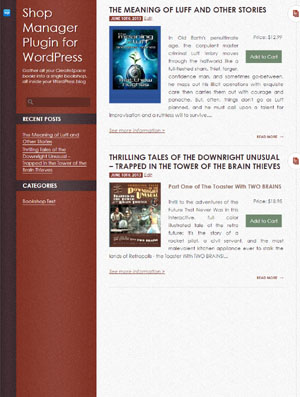 Although I did set aside my CreateSpace Shop Manager plugin for WordPress for a week or so, I’m back at it now and I just can’t describe the savagery and carnage that are taking place in my editor.

I finished laying out the admin page for the plugin, and I patched a few leaky bits, and I stopped a few small explosions from happening; then I went back to the core task of reading the data from a CreateSpace eStore page, throwing away a lot of HTML that no (nominally) sane person would want, and flowing it into a WordPress page.

But after I’d gotten pretty deep into my new method for that I really had to go back to the beginning and think it through. I’d started out trying to build the category hierarchy from scratch as though it were all a separate program; and that, you see, was foolish of me.

Because the average WordPress user just wants to plug something in and have it behave like all the other content in the blog. Which is not unreasonable.

The upshot is that I threw out a whole lot of my earlier work and started over, using the same methods but in a new, WordPressy way that I think will be simpler and better. (It’s easy to design something complicated, after all: it’s quite difficult to design something simple.)

A lot of that work is done, but heads will continue to roll while I strip out a lot of admin settings that make no sense any more.

The whole thing has transformed from a system of custom pages into a normal set of WordPress posts, contained in normal WordPress categories, and it all makes a lot more sense now, I think.

But the cool and nifty thing is that I’ve also resolved a lot of issues with theme compatibility. At the left you can see the same bookshop page displayed in three different WordPress themes. Each page shows the same category listing with a short version of the books’ descriptions: the whole post, when you click through to it, is a complete listing for the book.

That’s the result of a bunch of stuff I did today, before and during and after the carnage I mentioned earlier. I’m pretty excited now about how it’s shaping up.

One thing I’d like to include in the demo site is a way for users to switch from one theme to another, like I’ve been doing, but the plugins that claim to do that for users are all twitchy, cranky, or downright broken in recent versions of WordPress. So it may not be possible to show off the plugin’s flexibility except in screenshots like these.

And the demo site will be a project in itself, of course. But sometime in the next few days I hope to have a testable version of the plugin and I’ll try to recruit some testers for it. With forums! And handwaving! And stuff!

This entry was posted on Tuesday, June 11th, 2013
and was filed under Web Development, Works in Progress
There have been 9 Responses »

9 responses to “Return of the Son of the Bride of the CreateSpace Shop Manager Plugin for WordPress”
Monica says:

Hi. This is exactly the plug-in I need. Please let me know when it is available. Thank you.

As of yesterday all my planned features were in and working – though I still need to do a sanity check across the board. Once I’ve prioritized the next steps I may have an idea when I’ll be ready for a small number of testers.

But as far as I can tell, you’re not yet publishing any of your titles through CreateSpace, are you?

I’m a relatively new publisher. I’ve been a book developer for years. Now as publisher I’ve several books that will go up on CreateSpace.com just as soon as I’ve built my website. If it would help to wait until I have one or two books published on CreateSpace, I can rush that process in order to test. I might want to list some of my development projects too. At least one of thos is on CreateSpace.

I’d love to be a beta tester for your plugin. I really love the notion that you are using regular posts and categories. I’d love to see the integration with the cart. Your approach is going to make it so much easier.

I’ll let you know when I have the site up. Soon.

I’ll be in touch by email. I got derailed about three weeks ago and it will be a few more weeks before I’m back at work on this, but I’ll point you to a demo site where you can see how things stand at the moment.

This is highy interesting. Although I don’t currently have any books published at Create Space yet, I have a couple of pieces I’m working on, but first in the pipeline is a book a friend of mine is working on. I am a graphic designer and work mainly with WordPress for the internet, and have researched many publishing solutions before ending up with CreateSpace as my favorite choice.
The trick with CreateSpace is that their eStore provides the best royalty, but from what I have seen it doesn’t look especially impressing. WordPress on the other hand is very customizable and it has great opportunities to deliver the punch that a good book launch deserves. The alternative of purhasing wholesale and do my own distribution isn’t an option as I live in Norway. I’m far better off if your plugin could offer a simple way to buy directly from the eStore through a WordPress solution. I think such a solution could be very beneficial for many people 🙂

Arnfinn, that’s exactly the idea. Currently the pages have buttons to purchase from the eStore but you’ve also got the option to post other links where printed and eBook editions can be bought from other online vendors.

After setting it aside for a few months I can see that I’d like to do something a bit differently. The plugin’s actually on hold for the moment – there’s something else that I just need to work on instead. But I’d like to finish it up in the first half of next year.

This is a much needed plugin. Have you made any progress on this? I’d LOVE to have this plugin and I am sure many others would too.

As it turned out, there was very little demand for it – most people would rather just link to books on Amazon. Since I stopped working on the plugin I’ve found that I’d need to revise the way it grabs data, to make sure it works on all servers, and I also decided that all the content should be static rather than dynamic because performance was all over the map.

So it would take quite a bit of work to carry it forward, and as I said, very few people were interested.