Retropolis Rocket Ship update, in which we split the rocket in half and then put it back together 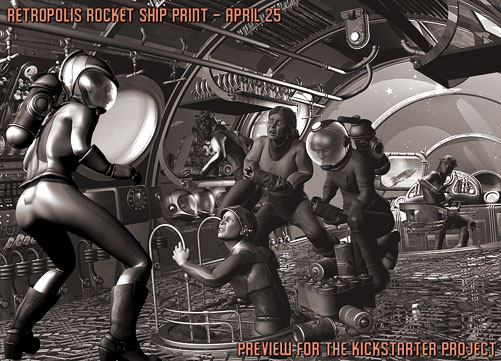 In today’s sepiatone update there are a number of big changes. (Click the image to embiggify it). You’ll notice that I’ve now dropped in actual characters in place of all those eerie bone systems that we’ve been looking at up to now: that’s the obvious change.

The other change was inevitable, but I wasn’t expecting it to happen quite yet.

Once the scene passed about two million polygons it started to get difficult to manage. The performance in the viewports (where I actually do the work) has been degrading all along, but once I had four or five characters in there I found it pretty unpleasant to work on the entire scene. It was easy enough to split out the characters on their own and work on them separately but eventually the pieces all have to come back together. With all but one character added to the scene I was already over 2.6 million polygons… and something just had to give. 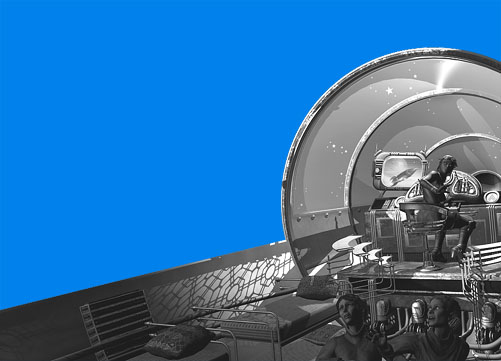 So the first big task I faced this morning was to split the complete scene into two layers. You’re looking at one of those (in greyscale) above. Everything below the deck and from the rocket’s front window forward is now contained in one scene file; everything else, in a second one. (With a couple of exceptions: you can see that the deck grating is casting a shadow in the image above even though the grating itself is invisible.)

I’ll be rendering these out as separate layers from now on and compositing them together. Because everything splits at the deck line and at one of the forward ribs the “front” scene goes in seamlessly when the two are combined. Which is pretty neat, if you ask me.

Here’s what that second layer looks like, also in greyscale: 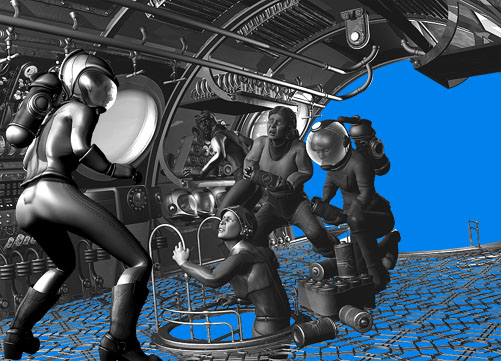 I’ve made the modifications to the control console that I mentioned the other day. The characters are pretty nearly there, but they’ll be seeing some more changes as we go. After them, the big remaining thing is the final lighting.

At the moment – as it’s been ever since I started – there are just three lights in the scene. One’s outside the ship, and shines through the windows; the other two are "practical" lights that are mounted just where you might place your light bulbs if you were lighting the ship yourself.

I’ll be adding some more, smaller practical lights and I’ll also veer into unreality with individual fill lights that will fine tune the lighting in specific areas and on the individual characters. That process will take some time – it means a lot of incremental changes and test renderings, which is why I haven’t done anything along those lines yet. Pretty soon, though.

We’re at this Kickstarter project‘s halfway point and we’ve only approached 25% of its funding. That’s a bad sign, of course, though I’m not obsessing about it. Really. I’m not. But if you backers have friends who might also be interested in the project (especially now that the picture is starting to look like a picture) I’d sure appreciate it if you’d spread the word!

This limited edition print project – if it’s successful – is something that I’d like to do again because it could expand into an "Art of Retropolis" book. I’ve been asked about such a book over and over but I’ve never felt that I have enough of the right kind of pictures to justify it. So a series of Kickstarter projects like this one might finally convince me that the book’s time has come. Though, as I look around, it seems like that idea might be premature :).

This entry was posted on Thursday, April 25th, 2013
and was filed under Thrilling Tales of the Downright Unusual, Works in Progress
There have been no responses »