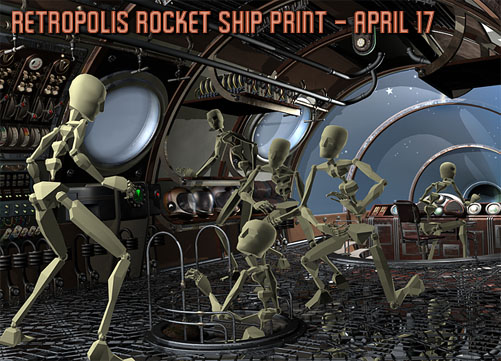 Here’s today’s update for the Retropolis Rocket Ship print. At this point I’ve left off the wireframe overlay and I’m letting the color speak for itself – not because it’s done, since the final lighting will contribute a lot there, but because it’s narrowing down to something like what you’ll see in the finished picture.

You can see that I’ve continued to work my way forward along the surface details of the fuselage. In fact there are a number of things you see less clearly here than you will in the final picture just because of the lower resolution of the web previews.

In the print, at its full size, you’ll probably be able to make out things like the rows of bunks on the lower deck. They won’t ever be completely clear, because they shouldn’t be, but odds are you’ll be able to peer through the deck grating to make out some of that background detail: the bunks, some piping, and the mechanical gizmos down below the cockpit stairs.

Next up will be some more changes to the control console, some additional stuff on a couple of the shelves, and then the characters.

This entry was posted on Wednesday, April 17th, 2013
and was filed under Thrilling Tales of the Downright Unusual, Works in Progress
There have been no responses »