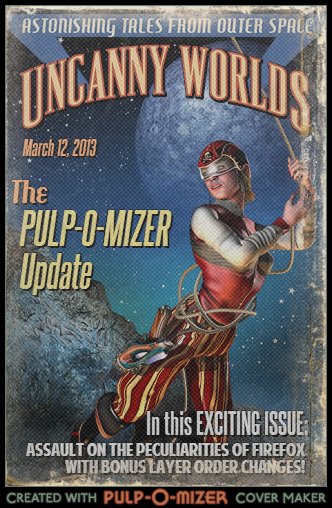 Because web browsers can be just as divisive as religions I try not to judge, mainly because people throw rocks at me when I do. But I probably haven’t concealed the fact that – as far as the Pulp-O-Mizer is concerned – Firefox stands out as the Village Idiot of browsers. That’s a problem, because Firefox has been gaining in popularity lately and so a large proportion of Pulp-O-Mizer operators have been getting a rockier experience than I’d like.

Within a week of the Pulp-O-Mizer’s escape from the Secret Laboratory I managed to fix almost every Firefox problem, including some unique problems with older versions of the browser. There was just one big, annoying problem left: Firefox would often draw the Pulp-O-Mizer layers twice when it was rendering a web resolution graphic.

Chances are you’d only realize that had happened when it was the distressed overlay layer that was drawn twice; some of those Firefox images turned out to be extremely distressed, as did I, when I saw them. From time to time a Firefox text layer would be also drawn behind the foreground layer – a bug so improbable that I sort of admired what Firefox had managed to do, there. This was almost certainly another instance of the same problem.

Well, about a week ago I thought of a way to work around that and this morning – when I was finally able to try it – it looks as though I did. Firefox will now draw a web resolution image slightly more slowly, but (I think!) without any risk of drawing the layers twice.

I made one other change. When I was building the T-Shirt images it turned out to be very important that I draw the text layer behind the title layer. In rare cases – when your text was overlapping the title graphic – the T-Shirt image would be slightly different than any other version. So I’ve changed that, too.

Now both the Pulp-O-Mizer preview and the web resolution images place the text layer behind the title layer; and soon I’ll change the product templates so that mugs, iPad covers, and other products will do the same thing.

Very few of you will notice that change. But the Pulp-O-Mizer knows. 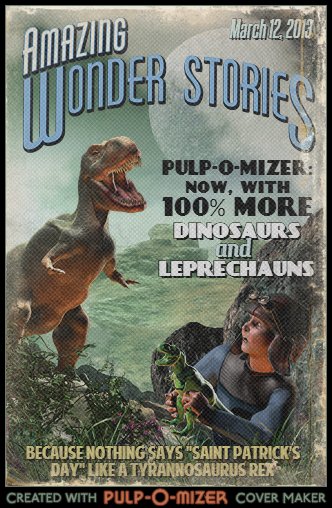 But of course that’s not the only Pulp-O-Mizer update: all along I’ve been using those spare hours (!) that I find under my pillow to add more image layers for your Pulp-O-Mizing pleasure. The latest of those are the one-two tag team of Dinosaurs and Leprechauns. Dinosaurs, because… well… Dinosaurs! And Leprechauns, because we just need more choices in that Holidays section.

I’m not a big fan of early 20th century Irish American merchandising and so I don’t have a lot to do with shamrocks, leprechauns, and other Madison Avenue excesses. If I can help it. Therefore I made my leprechaun look a bit like Hunter S. Thompson. I’m a complicated person.

This entry was posted on Tuesday, March 12th, 2013
and was filed under Thrilling Tales of the Downright Unusual, Works in Progress
There have been no responses »