The Men That Will Not Be Blamed For Nothing vs. The PULP-O-MIZER, sort of 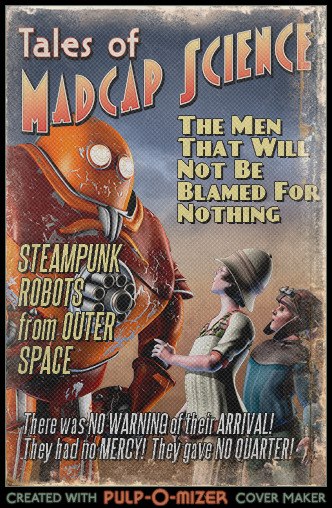 The UK Steampunk band The Men That Will Not Be Blamed For Nothing is sponsoring a contest for their Facebook watchers using the PULSATING POWER of the PULP-O-MIZER.

Through Friday, by which I mean Friday in Old Blighty, they want you to post a Pulp-O-Mized advert for the band. You can see the details on their Facebook page where they’ve announced that prizes will include two tickets to their show in London on April 27, plus some other things that may include posters, CDs, and T-shirts. And awesomeness.

This entry was posted on Thursday, February 14th, 2013
and was filed under Found on the Web, Works in Progress
There have been no responses »