The Pulp-O-Mizer appears to have launched 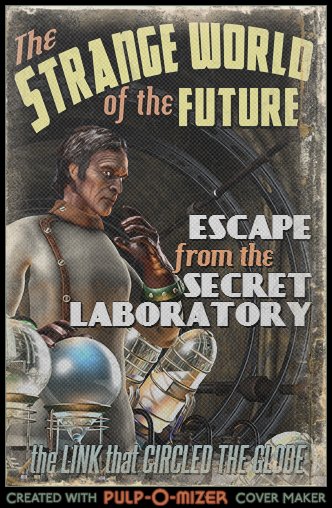 So, okay, that happened. It turns out that if you design something that you hope people will enjoy and play with and spread, and then you let the link go free out in the world… they enjoy it, and play with it, and spread it.

Now normally when I share a link to something of mine a few people will look at it and a small percentage of those few people will share the link with their friends. So yesterday I decided to open up the Pulp-O-Mizer to a few more people by posting the link publicly because, really, who pays any attention to me, anyway?

Well. Thousands of pageviews later I guess I have more data than I can really analyze (though mostly, things look pretty excellent). My tweet of yesterday got retweeted by several people who are more, I dunno, twittified than I am; that went on to Google+ with a surprising amount of response; and I couldn’t let my Facebook followers get outdone, could I? So I invited them in, and now the Pulp-O-Mizer has passed its unscheduled stress test with flying colors. And that’s neat. Pulp-O-Mizer images are already turning up in blogs and fora and at Tumblr and in other places.

There have been very few errors, judging by what I’ve found in the temp folders. I can’t be positive about their causes because the sheer number of page views is making it hard for me to match a file to a particular session (and its browser). But I do have a couple of things to look at.

In the meantime, I finally admitted to myself that the thing is out in the world now and so I cobbled together some changes at the Thrilling Tales site so that the Pulp-O-Mizer would be accessible through normal channels. Which I guess means I launched it. Much to my own surprise!

This entry was posted on Friday, January 25th, 2013
and was filed under Thrilling Tales of the Downright Unusual, Works in Progress
There have been 15 Responses »

15 responses to “The Pulp-O-Mizer appears to have launched”
Ron Fortier says:

Hahaha! Sounds like the launch of a hit product. Congratulations. 🙂

Well, we’re only talking about something like 250 pageviews per hour, so it’s not an actual avalanche. But it’s way, way more than I was expecting!

One nice thing – and I think it has something to do with Google+ – is that the page was indexed at Google almost immediately. It was like those fine old Infoseek days. So I already see people getting to the page through searches, and that shows me that my evil plan has borne fruit. (“Every image they post is an advertisement for the Pulp-O-Mizer!”) Muahahahaha!

How could you doubt it would be a success? The fannish world has been waiting for something like this for centuries! (Well, maybe decades, then.)

One of these days I hope I’ll be able to replace my sturdy but fading Retropolis t-shirts…so please don’t stop doing what you’re doing. 🙂

Really cool. Hoping for updates in the future to add more horror-oriented options.

I bet you’re getting more than 250 views an hour now! Simply excellent. Thanks for being there!

Howard –
Oh, yes :). I think traffic peaked last night at just a little under 5000 pageviews per hour… I’m kind of expecting some hate mail from my web host but so far they’re quiet over there.

Thanks so much for creating this. It just made my day!

Thanks from me as well. I’ve been working on pulpy stuff like this for ages and your brilliant works have really helped me to get through some writer’s blocks, as well as provide inspiration.

Glad to see someone else out there enjoys this stuff as much as I do. Maybe one day I’ll get to have you illustrate a book cover for me, haha!

The Pulp-O-Mizer is awesome! I’d love to see some bug-eyed monsters and eldritch horrors added in, if you ever get the chance.

What can I say… I am blown away by the pulp-o-mizer, your art, and the entire concept of the website. I stumbled upon your site by chance looking for examples of pulp sic-fi art.

One thing I would really love would be the ability to create and download hi-res images. I would pay for this. Could be a money-maker for you. Also, I would like to inquire about the availability of larger size posters (24 x 36).

At any rate, keep up the great work. Let all of us know how we can support further development of this very cool tool.

THANK YOU for making this available!!! IT IS AWESOME!!

This is fantastic – used it to create a great little cover for a new story just released and telling everyone to come check you out!

Any way you could email me a 300dpi version? I’d be willing to pay. Also, an option to disable the magazine title layer would be cool.