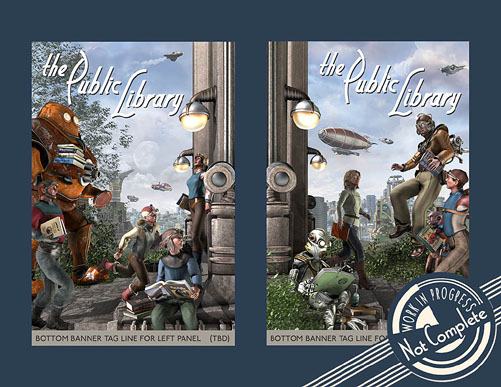 Late yesterday I launched the Indiegogo campaign that aims to send my upcoming Retropolis Public Library prints to your favorite library – and to about ten libraries that have meant something to me. The campaign’s pretty modest goal of $3200 is just enough to do that; but it’s when we meet and exceed that goal that things get really interesting.

That’s because for every 250 prints that we send to your favorite libraries I’ll be able to donate $1000 of actual cash money to my own local library. If we send off 500 prints, I get to donate $2000, and so on, up to… oh, wait. There’s no limit. That means that if we were to send 10,000 prints to your favorite libraries, I’d donate $40,000, which is an astonishing chunk of change even though I have to admit it’s not likely we’ll get quite that far.

I’m fond of my local library, but when I tell you that our town has a population of about 15,000 people in a region whose economy was once based on manufacturing, well… I think you can imagine what’s happened to every kind of local agency’s budget in the past few years in a series of reductions that – everywhere – often starts with the local library. So when I figured out what the stretch goals for this campaign might be I felt quite excited to think that I might be able to give a boost to my library’s budget.

Now of course that’s not the primary goal of the campaign. The primary goal is for people like you to do something nice, improbable and, just maybe, a little bit odd for your own local (or other favorite) libraries, by sponsoring a gift for them of one or both of these twenty by thirty inch archival ‘Public Library’ prints. When you sponsor that gift I’ll send the print(s) to your chosen library along with a letter that explains just how this happened and that you’re the one responsible. 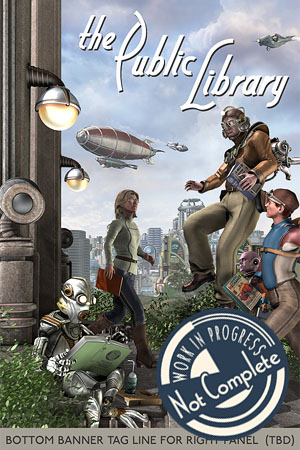 There are other rewards (‘perks’, in indiegogospeech) including getting the prints for yourself. But the real aim is to put these retro-futuristic promotional prints on the walls of as many libraries as possible. In about thirty days.

So go look! And, I hope, decide to dive in and do something peculiar and interesting for the people who also serve by standing, waiting, and then giving you the books you want to read. Please: stop and think about how wonderful and unlikely that is. No, I mean it. Really stop and think. Then, please, join in.

This entry was posted on Thursday, November 1st, 2012
and was filed under Thrilling Tales of the Downright Unusual, Works in Progress
There have been 2 Responses »

2 responses to “Send these Retropolis Public Library prints to your favorite library (and to mine)”
Mark Graybill says:

Supported, and blogged at: http://catsonkeyboards.blogspot.com/2012/11/raising-money-and-beautifying-public.html

I just learned about this campaign, which it seems has ended. I would love for you to open it back up! I would absolutely support it financially (your art is incredible). I’m also in library school right now and would promote this with my classmates and professors — I think you would get a great response.