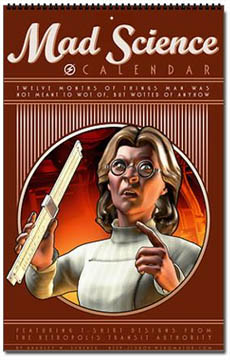 Hot on the nonexistent heels of my rebuilt calendars (I couldn’t squeeze in that last minute "heels" upgrade) comes the MAD Science Calendar; that’s twelve months of Things that Man Was Not Meant to Wot of, But Wotted of Anyhow. Because we’re sort of like that, when it comes right down to it.

This Calendar from Retropolis includes the year’s new favorites (the "SCIENCE" series) along with more pages that I’ve lovingly adapted from the T-Shirt designs at The Retropolis Transit Authority.

So in addition to "New, Improved SCIENCE: Now, With Death Rays!" in one month you’ve got "Tell it to My GIANT ROBOT", "Certifiable MAD GENIUS", and nine other months of merciless experimentation, unfortunate lab assistants, and Things Gone Wrong.

Like my other new calendars this one has rolling start dates: you just pick the month you’d like to start the calendar on and it automatically churns away to spit out twelve months beginning at that point, in a timey-wimey manifestation of That Stuff We Wotted Of.

Still to come, maybe: a couple of new calendars for The Celtic Art Works.

This entry was posted on Friday, September 14th, 2012
and was filed under Works in Progress
There have been no responses »