Thrilling Tales – Back on the schedule and out on the porch 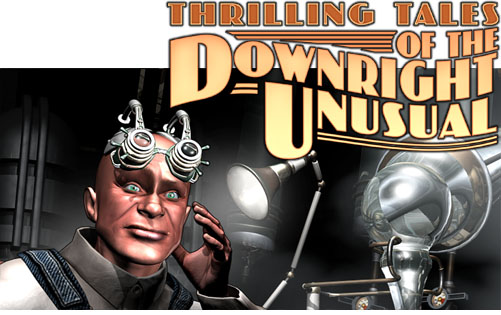 So this week marks my return to the new, improved Thrilling Tales schedule. My schedule, I mean: not yours.

This follows my frantic scrambling to set up the current Intermission for the Thrilling Tales site, which in its turn was followed by a couple of weeks of much needed website work, new merchandise design, and, um, house cleaning. Yeah, even in the Secret Laboratory, I’ve got dust. And then data backup and some other important things that have been delayed.

But this week! This week, I’ve returned to Part Two of The Toaster With TWO BRAINS in the mornings, while in the afternoons I’m working on a new serial for the site. Which involves writing (quite a lot of it) which is something I can now do on the porch when I feel like it. Which I do.

The TWO BRAINS work has kicked off in an unexpected way. Back in the Summer or Fall I applied my new character system to Gwen, who’s an important character in Part Two; last weekend I did something very similar with Nat Gonella. But when I paged through the illustrations I’ve completed for that story, I decided that I didn’t like everything I’d done with Zeno.

With a few of his scenes remaining to go I decided to redo some of the finished illustrations where Zeno already appears. So I spent a couple of days working on a new head for him which, as we see above, is nicely expressive. I’ve now redone one of his illustrations and I should be able to work through about three others before I get down to something entirely new.

There are some serious questions about how ready the new serial will be when the Intermission concludes. This is a longer form story and it’ll be an unusual amount of work, not to mention the possibility that I’ll need to make many revisions as I go along. I’ve always been reluctant to start publishing one of these stories before the manuscript is really done. Dickens did it, but, you know, he was Dickens. So I may be as surprised as anyone else to see how things work out by Summer’s end.

For now, though, it’s nice to be back!

[tags]thrilling tales of the downright unusual, the toaster with TWO BRAINS, it’s nice to sit on the porch[/tags]

This entry was posted on Wednesday, May 16th, 2012
and was filed under Thrilling Tales of the Downright Unusual, Works in Progress
There have been no responses »