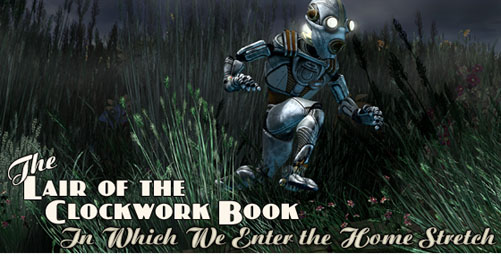 Yesterday was another eventful day for The Lair of the Clockwork Book‘s Kickstarter fund drive. I posted a new update there, in which I did a much better job of explaining why this project is structured a bit differently from most Kickstarter projects, and then at around 10:30 PM EST the project achieved its goal. This was a bit surprising. I had an idea that it would get fully funded sometime today, but things accelerated during the evening.

It’s still not over, though! I’ve got another 31 hours to attract some more of the Internet’s fleeting interest and find good homes for a few more of these handsome books.

As I was gathering my thoughts for that update I found some interesting comparisons between this, which is effectively a book pre-order, and my last Kickstarter project, which looked far more normal but had its own dark secret. This might be interesting to nobody but me. Still, once the dust has settled I may write those thoughts down for the blog.

Anyway I continue to drive traffic to Thrilling Tales of the Downright Unusual and to the Kickstarter page in these final hours, while I’m still occupied with the final illustrations for the book. I discovered a couple of days ago that I’d never assigned a number to one of these last chunks of story, and that means I need one more picture than I’d realized.

This entry was posted on Monday, February 27th, 2012
and was filed under Thrilling Tales of the Downright Unusual, Works in Progress
There have been no responses »