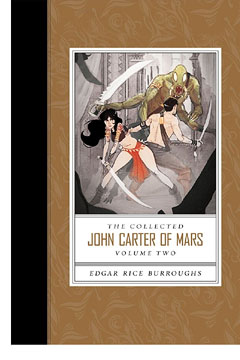 To coincide with their upcoming movie, Disney has collected all of Edgar Rice Burroughs Mars books in three volumes of Barsoomian adventure. The whippersnappers of today will have to do without the wonderful old Roy G. Krenkel and Frank Frazetta illustrations that I remember, but these look like handsome editions anyway.

A Princess of Mars; Gods of Mars; Warlord of Mars

Now everybody can count the number of times that John Carter refers to himself as "The greatest swordsman on two planets"! Not suitable for drinking games.

They’re out in paperback and for the Kindle.

This entry was posted on Thursday, February 9th, 2012
and was filed under Found on the Web, Reading / Watching / Consuming
There have been 3 Responses »

Do you have volume 2 and volume 3 reversed? The books in volume 3 come before the ones in volume 2.

Ack! You’re right. Amazon brought them up in the wrong order – I remember I was surprised that “Thuvia” came that late :). Fixing now…

You need to warn your readers that for unaccountable reasons Disney has left out all the fictional prologues, which are part of the stories.