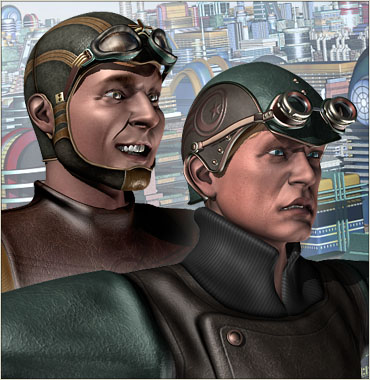 What began as a frenzied effort to make a bunch of characters that I can use in crowd scenes for both The Lair of the Clockwork Book and The Toaster With TWO BRAINS has unexpectedly turned into a whole new character creation process and, along the way, a whole new generation of character models. I’m excited about this even though I continue to worry about my Thrilling Tales schedule.

Because the object structure of my male heads is different this has meant repeating a lot of the setup work I’ve done for my women. But I’ve also done something new and neat that nearly works as planned – more on that below.

It started during the summer with tasks that I sprinkled in between my Clockwork Book illustrations. I created a series of very low resolution clothing objects and used Mudbox to sculpt them into much higher resolution models. Then I exported them in high and, um, less high versions. I completed the materials and textures on the high resolution models, then baked that texturing and the higher res normals into my medium res objects. (I did this in two different image resolutions, so I could switch between textures depending on how large a character appears in a scene).

Since then I’ve been working on new character heads that use morph targets for their expressions. More importantly, though, I’ve been working on the process for creating those heads so that it’ll be much easier to make new ones now, and the results should be much better.

A morphing character head consists of a base object – the head in a neutral state – and a bunch of other variations on it with expressions or other changes. So long as the structure of all these heads is exactly the same you can dial up one expression or another on the neutral head. In effect you have a single head that you can vary as needed.

Some of the things I’m doing involve changes to the objects. The simplest of those is lowering their resolution. Now, making changes to morphing objects is extremely tricky. You have two choices: either apply those changes to the neutral head after the morphing modifier – which is perfectly safe – or apply the exact same changes to every version of the head before the morphing modifier. Some modeling changes just can’t ever work on the raw targets. Some work most of the time. Some seem to work all of the time. As I work on my modifiers, I have to test them repeatedly. And it’s also important that these changes will work in the same way on every new head I make.

But the results are worth it: ideally, I can create any male character head and apply the exact same changes to it. After all that initial work what I have is a much more streamlined system to use over and over again.

Like I said, polygon reduction was the main thing I was interested in – but as of this morning I have a usable system for doing something completely different.

Switching to morphing heads makes some things more difficult. In the past I designed a style of headgear that’s very common in Retropolis: a kind of form-fitting cowl, like an aviator’s helmet, that hugs the head and wraps around the chin.

When my characters were moving their heads and faces through bones, this was no problem. The cowl would be skinned to the same bones as the face and so it would move as the face moved. But the switch to morph targets meant that couldn’t work any more. The entire face would be moving in a way that the cowl couldn’t follow automatically.

So what I set out to do was to create an object modifier that would cause the cowl to grow out of the head. However the head moved, the cowl would grow out correctly because it would always be based on the current state of the head – and remember, that ought to be any head. By doing it this way I could apply the cowl to all the morph targets, if I liked – they’d still have an identical structure once this same change was applied to all of them. But along the way I thought of something much smarter. 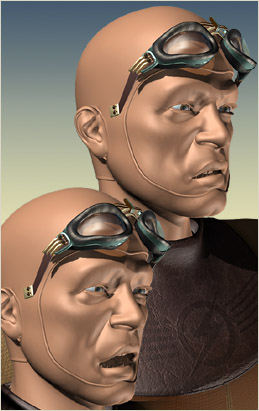 By adding the cowl modifier after the morph takes place I could have my morphing character with headgear; if I turn off that modifier, though, I have the exact same character without the headgear. Slap some hair on the head and I’ve got my guy both ways.

And it almost works perfectly. I’ve been referring to my cowl-growing process as "a modifier", but in fact it’s two modifiers that get applied in sequence. There’s still something wrong when I apply the second one – I’m finding that I have to finish the process by hand, once, for each new character. But even if I can’t sort out that problem I have a nearly automatic process for growing a Retropolitan aviator’s cowl right out of any new male head I make.

Sometimes, I feel really smart. This is almost one of those times.

Now I just need to crank out a few more of these guys before I have to go back to work on the last of the illustrations for The Lair of the Clockwork Book. There aren’t as many to do in this batch, but I know they’re going to be difficult ones. So, you know, I worry.

This entry was posted on Wednesday, November 16th, 2011
and was filed under Computer Graphics, Thrilling Tales of the Downright Unusual, Works in Progress
There have been no responses »