Illusionoid podcast – An urgent message to the past… from the future!

In the distant future, humanity will be annihilated by its greatest creation: a half-mad, living computer called… ILLUSIONOID! 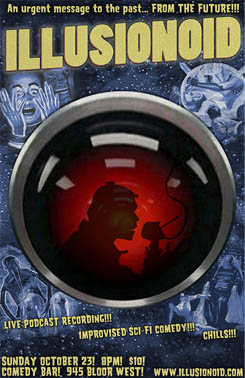 Hidden on an abandoned moon post, a lone survivor sends cryptic messages backwards through time, desperate to warn of the deadly danger to come. Will you heed these warnings?

Move a little closer to your Time Radios. That’s it: just like that. Good. For what you are about to hear may change the future… and ultimately spare Mankind from the monstrous menace of… Illusionoid.

Part Satellite of Love, part Twilight Zone, and part An Evening at the Improv, ILLUSIONOID is a bi-weekly (fortnightly?) series of podcasts in which Paul Bates, Lee Smart and Nug Nahrgang take a strange, inspiring title and run with it for a few minutes of demented improv claiming to be a cautionary broadcast from the Last Man in the Universe. They solicit for titles on their Facebook page and now, since they’ve just discovered my Pulp Sci-Fi Title-O-Tron, they may be using that for inspiration, too.

I can’t wait to hear what they make of something like Shadow of the Accountant of Doom or The Astronomer That Misplaced the Galaxy.

The language may not be entirely safe for work (depending on where you work; sailors are probably going to be fine). But with that caveat, go forth to the Illusionoid web site and sample tales like "Whither Saturn?" and "Time Goat". And if you happen to be in Toronto on Sunday evening there’s a live recording session at Comedy Bar.

This entry was posted on Wednesday, October 19th, 2011
and was filed under Found on the Web
There have been no responses »