The Guild, Season Five – it’s been invaded by my T-Shirts! 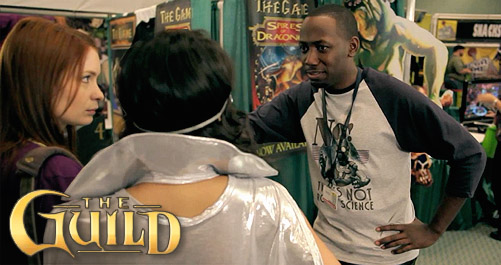 Anybody who does creative work on the Web has to have a special place in their heart for Felicia Day and her web series The Guild. This ragtag dream team of filmmaking guerillas, starting with basically nothing (and continuing with basically nothing) has somehow managed to survive for five seasons in their adventures across the dangerous seas of sponsorship, promotion, merchandising, and whatever you call the craft of making a series with what amounts to two potato peelers and a large helping of good will.

We’d all like to be Felicia Day and Kim Evey when we grow up.

So when I heard a call for donations of merchandise for the upcoming fifth season of The Guild, I was all over it. What’s not to like? On the one hand, I could contribute something that – like so much else – The Guild just didn’t have a budget for; while on the other hand it can’t hurt to be associated with something whose karma is as good as The Guild’s.

The problem the Guild team faced was that this season features a very large number of background actors. Most of the scenes take place on the floor of an imaginary convention (MegaGame-ORama Con!) and they were shot on the floor of an actual convention at the Long Beach Convention Center; but those 140-odd extras all had to be dressed like con-goers and – I assume – there could be problems if they were wearing graphics from licensed, franchised films and books. So the Guild crew needed lots of T-shirts in all sorts of styles, colors, and sizes.

A whole bunch of those T-Shirts, as it turned out, came from me.

It all came together very quickly – at the last minute – and it wouldn’t have happened at all if my printer, Printfection, hadn’t stepped up to the plate and turned out the shirts at a frantic pace, and even upgraded the shipping so the shirts would get there in time. Seriously: this would never have worked out if the elves at Printfection hadn’t done some special magic. Thanks!

Season Five of The Guild is now up to its ninth (of twelve) episodes, and it’s featured some astonishing cameos from the likes of Nathan Fillion, Neil Gaiman, Eliza Dushku, and others. All through the season to date I’ve been watching the background for something I could point at and say "Hey! I did that!" 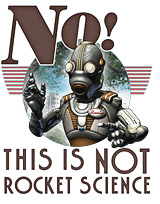 But since my shirts are mostly on the background folks, I’ve nearly waited in vain; back in episode one I got a full-screen eyeful of my Celtic Knotwork Biohazard T-Shirt from Saga Shirts; but on the whole, there hasn’t been much that was obvious – ’til this week, anyhow. I’m happy to see that the grim sentinel of The Game’s own booth is sporting my "This Is NOT Rocket Science" shirt from The Retropolis Transit Authority. My shirt has lines!

So unlike most of those who are watching The Guild this season, I’m spending a lot of time staring at the chests of everyone on screen. At least, I think that’s unusual. With three episodes left to go I’m hoping for another major squeeable moment.

So, okay, that Neil Gaiman scene counted, too. The guy was incredibly funny. He just need a different shirt. 🙂

This entry was posted on Thursday, September 22nd, 2011
and was filed under Works in Progress
There have been 2 Responses »

2 responses to “The Guild, Season Five – it’s been invaded by my T-Shirts!”
Kristen says:

Just fantastic!! Just started watching The Guild, and now I have something else to watch for in it as well. 🙂

Yep, pretty neat. I swear, though, if you follow everything they’ve been through to make the show (and to keep making it) it’s just about as interesting. Though, hmmm, maybe not as amusing :).