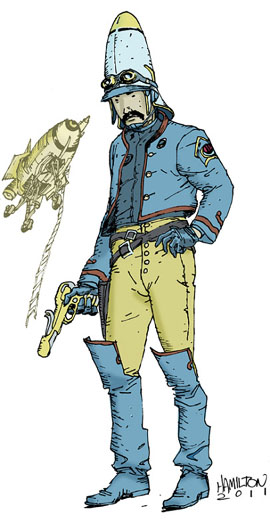 There’s a long standing feature over at the Whitechapel Forum in which artists each do a "remake/remodel" of an obscure (or even a well known) character from the history of comics and genre fiction. This week it’s Spurt Hammond. Yes. You got that right. Spurt Hammond.

You should know in advance that there will probably be no spurt joke left unturned and if spurting phallic symbols upset you, you probably shouldn’t look… but on the other hand you might ask yourself just how symbolic a phallic symbol is if it never, ever… well… spurts. Food for thought.

But I digress: the whole reason I even mention this is that I was so taken by this non-spurting, nearly non-phallic drawing by Tim Hamilton, who’s also the illustrator of the recent graphic novel version of Ray Bradbury’s Fahrenheit 451

Our steampunk Spurt here seems to travel by airship (which is always a plus) and the rendering has a slightly scratchier than Moebius flavor that I really like.

And if you’d like to understand what on Earth the original Spurt Hammond was all about, this link probably won’t really help; but it’s a snarkily-commented version of an original Spurt story from Planet Comics in 1940.

This entry was posted on Wednesday, September 21st, 2011
and was filed under Found on the Web
There have been no responses »