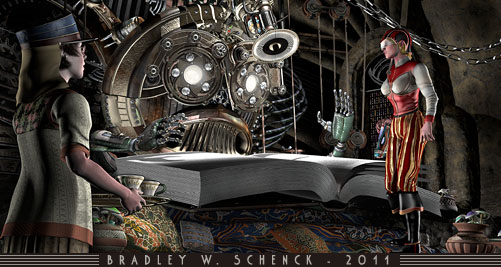 Sometime last week I started in on the illustrations for the third (and final) act of The Lair of the Clockwork Book. When, exactly? No idea. It’s all a blur. But here we are with an invigorating cup of tea, so maybe I’ll remember later. In the meantime, clicking on the above picture will begin its unstoppable, relentless embiggification.

Captain Bonnie Scarlet is one of Tallie’s favorite clients. The stories Captain Scarlet trades to the Clockwork Book are, Tallie’s sure, second to none; and while her need for secrecy makes her visits rare this Captain of the Space Pirates will join Tallie and the Book in, let me count ’em, um, around January.

Captain Scarlet will be with us almost to the end of the story… and so will Tallie’s Foreign Legion cap, which I’ve now decided is the finest hat she’s got.

There won’t be much time for hat-juggling as we near the end of the story: things get hectic once we’re sure what the Book is after and why, and quite a few threads will manage to weave their way back into the story as Bonnie Scarlet discovers just how the Clockwork Book hopes to succeed. There will be ballistics; there will be frantic televideo calls; there will be gravity. Also, there will be tentacles.

This entry was posted on Sunday, September 11th, 2011
and was filed under Thrilling Tales of the Downright Unusual, Works in Progress
There have been 2 Responses »

Tallie’s Foreign Legion cap? I suppose so. I’m rather partial to the fedora with the gold rose, myself…

Yep, I’m sure I should have said “my favorite” rather than “finest”; I try to watch out for those absolutes.