There’s an unusual amount of activity on the Wally Wood retrospective front, with collections coming soon from both Vanguard and IDW. This pleases me. I’ve always felt that Wood wasn’t valued highly enough and now there’ll be hundreds and hundreds of pages on the bookstore shelves to show everybody why I think so.

was originally announced with 136 pages of Wood’s EC-era science fiction comics stories: but in a last minute expansion that page count has now been raised to 208 (count ’em! 208!) pages. 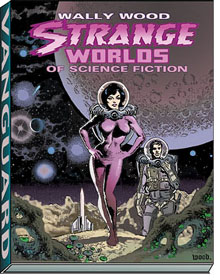 That’s a lot of Wally Wood in there.

According to Vanguard, much of the new content is Wood’s complete science fiction work for Avon, the paperback publisher whose comics arm was a competitor with EC Comics up to the mid-1950’s with titles like Strange Worlds and Out of This World Adventures.

One of the many things to look forward to, then, is that this collection will include not only the EC Comics stories, but an even larger amount of the work Wood’s best remembered for – his science fiction comics stories from the 1950s. And while sentences like that infuriated Wood later in his life… well, it’s true. That is the work he’s best remembered for. But it may still act as a gateway drug to get you all to look at the wonderful work he did later on in his life. 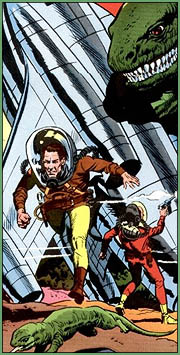 I was thinking a lot about Wood last week while I was lighting a couple of scenes. His inking was powerful and unique; his body of work has a lot to offer to anyone who makes pictures.

Folks – especially on the Internet – tend to repeat some of Wood’s most sarcastic comments like Never draw what you can copy; never copy what you can trace; never trace what you can photostat and paste down. Most of these came about when Wood was a disappointed and angry man, and because they’re a direct reversal of what he did in this work from the 1950’s I see them as instructions he was drumming into his own brain – because they were in fact at odds with his nature.

Wally Wood tried to reform himself into a hack because he’d been so frustrated by being the artist he started out to be. That’s one of the reasons why Wood makes us sad. These hundreds of pages

, from a time before he’d beaten his head bloody against his own career, are the reasons why he should make us happy.

This entry was posted on Sunday, August 28th, 2011
and was filed under Found on the Web
There have been no responses »