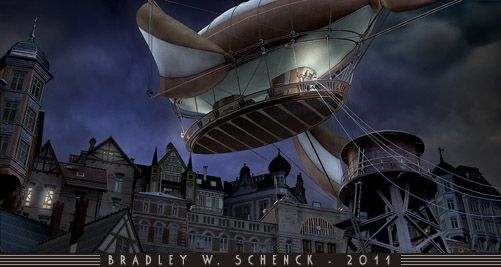 You’ll be seeing Osgood Finnegan again, around late September, in The Lair of the Clockwork Book. For the moment you can see his airship sailing out over… someplace. Click it, and see it swell into world-dominating magnificence!

The new illustrations are moving along at a respectable pace – that surprises me, since I’d been dreading the number of new things I’d need to build for this one. But between my working quickly, on the one hand, and cheating outrageously, on the other, things are going well so far.

I’ve even been thinking about exactly what comes after The Clockwork Book and Part Two of The Toaster With TWO BRAINS. Part Three, obviously: but there will be a new serial to figure out too. I keep having these urges to fold in something I was working on awhile back – but since that one nearly destroyed my brain last time around I have to question whether that’s a very good idea.

It all depends on how much I like my brain, doesn’t it?

This entry was posted on Friday, August 19th, 2011
and was filed under Thrilling Tales of the Downright Unusual, Works in Progress
There has been 1 Response »

One response to “Thrilling Tales – Osgood’s Airship is coming to The Lair of the Clockwork Book”
rainycity1 says: