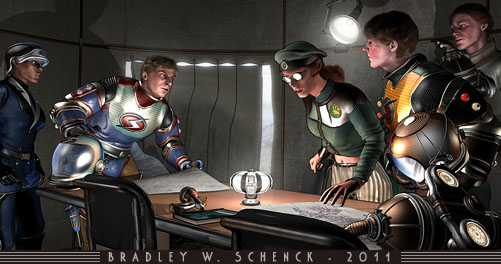 On the slopes of the volcano Fremrinamur in a remote and ashy part of Iceland where only mad scientists thumb through the real estate section of the local paper, the Space Patrol has established its camp around the well defended tower of mad Doctor Rognvald. Here we’re very near the beginning of Part Two of The Toaster With TWO BRAINS… although in a total refusal to conform I’m actually about a quarter of the way done with that story’s illustrations.

You can click the picture above to initiate an explosive form of embiggification which, although terrifying, is Entirely Safe When Used as Directed.

This is the second illustration in the story. I still haven’t managed the first one: I guess I can’t take the pressure. But anyhow I’m nearing the end of this weeks-long excursion into TWO BRAINS so soon I’ll reset my own brain, and get back to The Lair of the Clockwork Book.

Come to think of it, during those last anxious weeks of the Clockwork Book I never realized that I’d passed the halfway mark. Over half those illustrations are done now… when I include a bunch that you haven’t seen yet, but I have.

There is a web project that I really need to make some progress on, and I’ve been asked to do an illustration for something else, too. So once I’ve finished two more of the TWO BRAINS pictures I’ll probably try to race through those two things before the big reset.

This entry was posted on Wednesday, July 27th, 2011
and was filed under Thrilling Tales of the Downright Unusual, Works in Progress
There have been no responses »