Thrilling Tales: News from The Toaster With TWO BRAINS 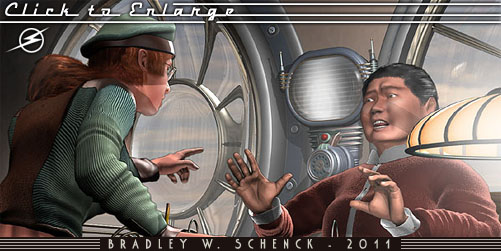 Work proceeds apace on Part Two of The Toaster With TWO BRAINS while I watch the pages update in The Lair of the Clockwork Book. Here we see Gwen, who is not completely happy about what she’s learning from Doctor Temiar.

"Apace", I think, is just vague enough to suit because in the nature of things I work wildly but slowly on new scenes or characters, then produce the illustrations just as wildly but quite a bit faster; then rinse and repeat. I spent about a week on Doctor Temiar’s office only to find that you’ll never even see parts of it since the final shots worked better if I concentrated on one side of the room.

That’s because here I’m continuing something I’ve played with in the Clockwork Book illustrations, which is to (often) follow the rules of continuity editing as we go from page to page. I’m not welding myself to those rules; in fact with an interactive story like TWO BRAINS it’s sometimes impossible, or at least unusually difficult; but I’m trying; and I am also indulging, I see, in a large number of semicolons; this is due, I am sure, to the fact that I’m re-reading Patrick O’Brian’s Aubrey and Maturin books.

Anyway this is part of Gwen’s main branch in the story, which soon after this point splits again into two additional branches in that branchy way these things happen. I started with a bunch of illustrations that come late in the story; here I’ve reined myself in, and I’m much nearer the beginning.

This entry was posted on Monday, July 11th, 2011
and was filed under Thrilling Tales of the Downright Unusual, Works in Progress
There have been 2 Responses »

2 responses to “Thrilling Tales: News from The Toaster With TWO BRAINS”
Thalia says:

Oh I always blamed Tolkien for my overuse of semicolons.

Oh, I don’t accuse O’Brian of semicolon abuse: he makes wonderful use of language that suggests the early nineteenth century. Now and then he summarizes a conversation (along the lines of “The astonishing familiarity of the orang-utangs; some observations on flora of the crater; the inadvisability of placing one’s hand in the mouth of an unconvinced night-ape”) in a way that reminds one of those chapter summaries you often see in books from his period. In fact I think he’s a very accomplished writer.