Thrilling Tales: an airship, a quandary, and a resolution to cheat 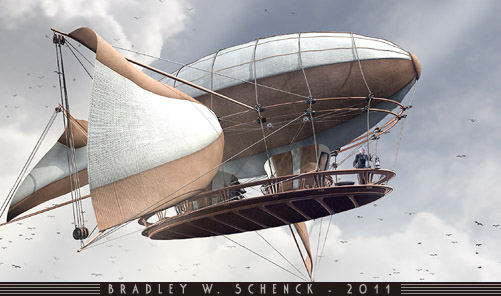 As you see, our friend Osgood Finnegan is sailing off in his airship and that, I have decided, is my cue to switch back to my work on The Toaster With TWO Brains.

I haven’t completely filled the Clockwork Book buffer – I’m constantly banging my head against Zeno’s paradox, here – but in order to do the next two illustrations (thereby to catch up) I’d have to create two new characters. Due to the length of time I’d spend on that, by the time I’d "caught up" I wouldn’t, in fact, have caught up. I’d need to do several more illustrations to make up that time in filling my ever-dwindling buffer of complete illustrations.

It’s just bad luck, really. It’s got to do with what I’d need to build right now. Over time the hours would average out, I’d be happily caught up in all actuality… while the birds sang, and the bees buzzed, and Osgood’s airship would sail on with its favorable wind.

But I’m tired of chasing the buffer. I’m going to swap over to my other story while I’m still two pictures short, and just take a week off The Toaster With TWO BRAINS at the end of its part of the schedule.

If I hadn’t had to model the airship I’d have been back on track this past weekend: but after that, the two new characters are just too much to bear.

This is my decree.

This entry was posted on Tuesday, June 21st, 2011
and was filed under Thrilling Tales of the Downright Unusual, Works in Progress
There have been 2 Responses »

2 responses to “Thrilling Tales: an airship, a quandary, and a resolution to cheat”
Val says:

Hoorray! More of the Toaster with Two Brains! I am REALLY enjoying it.
Keep up the good work.
And then, too, you don’t want your fans to get restless.

Well, the Clockwork Book is there to keep folks from getting restless; the interactives, unlike a serial, have to be posted in one go – so you won’t be seeing the new TWO BRAINS until sometime next year, when it’s all done.

I started The Lair of the Clockwork Book so that I’d have new content appearing often at the Thrilling Tales site. But in one of those ironic or malicious twists of fate, it also means that the next part of The Toaster With TWO BRAINS will take me that much longer to finish.