Thrilling Tales: how milestones are like Zeno’s paradox, with robots 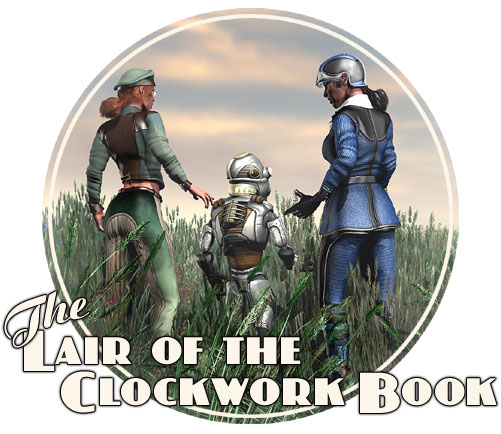 While The Lair of the Clockwork Book isn’t exactly headed off into the sunset, I am just now finishing the last illustration for its upcoming story; you’ll be seeing the new pages over a sixteen week period starting in early June. I’m really pleased with this new series of illustrations and, naturally enough, I hope that you will be, too.

Over the next week I’ll be entering the story data for those weeks’ worth of updates and I plan to revisit two of the pictures that I still think could be made a bit better.

This second series will begin to appear (on schedule!) on June 2. But I’m not quite done in there yet because before I can rewire my brain for Part Two of The Toaster With TWO BRAINS I need to make sure that the Clockwork Book buffer is around 32 updates ahead of what’s appeared so far on the site. In a Zenolike bit of scheduling, that’s a moving target: the longer it takes me to fill the buffer, the longer I have to keep at it because the pages are updating as I go. I do expect to catch up to the tortoise before the middle of June. But then I’m no Achilles, am I?

This entry was posted on Sunday, May 22nd, 2011
and was filed under Thrilling Tales of the Downright Unusual, Works in Progress
There have been no responses »