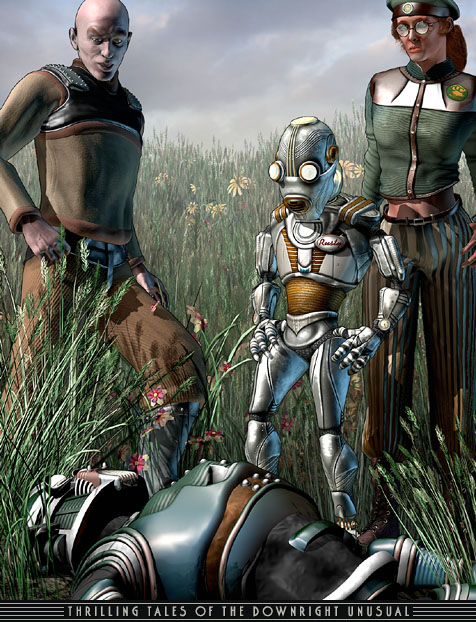 I’m just two illustrations away from completing the next story for The Lair of the Clockwork Book. Okay, make that one-and-a-somethingth illustrations: my computer’s rendering away as I type this.

I’m still not really on schedule; I’ve got a dozen or so more to do before I’ve got enough pages in my buffer that I’ll be able to go back to The Toaster With TWO BRAINS. But I think I’ve made up some of the time I lost when I took about a week each to do two (yep, two) of these pictures. I’m not completely sure why that happened… but there were technical problems, stubborn lighting issues, and what all, which in this case meant that I got ill for a few days in the middle of everything. Those two pictures could be the whole reason I’m running late.

In fact, I want to go back and rework two more before they start to go live at the Thrilling Tales site. Next week will be a busy one, though I realize that doesn’t actually mean it’ll be different from, say, this week.

This won’t show at all to you, of course. It just means that I’ll stick with the Clockwork Book for a bit longer than I’d planned in this part of the schedule, for however long it takes for me to get 32 pages ahead of what’s been published at the site.

As far as what you can see of The Lair of the Clockwork Book, we’re nearly through the story of Osgood Finnegan (which is the first story of Osgood Finnegan, as you’ll see later). I rewrote large parts of that one just before I added it to the site and I’m still a little worried about the fact that it’s different in tone… for reasons that are quite necessary, but which still worry me a little. I’ll feel a little more comfortable when we get started on the one pictured here since it’s back in the "present" of 2039, where I feel a little more at home.

This entry was posted on Wednesday, May 18th, 2011
and was filed under Thrilling Tales of the Downright Unusual, Works in Progress
There have been 5 Responses »

I would expect the stories which have come to the Clock from a variety of people at a variety of different times, to have different tones in the telling. So, if I’m understanding the concern you’re expressing, it strikes me as a good thing rather than bad. Do I miss the point?

Well, like I said, it’s something that’s necessary (and even important) but it bothers me a little; this story’s actually told in something like the Book’s own voice, for one; but it’s also not a humorous story, and that might be the thing that troubles me most. I did a few eleventh-hour things to try to pull it more into line with the others, and maybe that worked. On the other hand, a friend of mine once said to me “Dude, you think way too much.”

on another note, if I haven’t risen to the bait of all these teasers of things to come, I’m still lurking, reading, waiting…. patiently!

That’s an event that’s come and gone but isn’t visible to the world at large yet. It’s somebody else’s project so I can’t really say anything about it until they’re ready. Except that’s it’s pretty neat :).

Well I’ll say your work is fantastic and I think your stories would make an excellent movie!