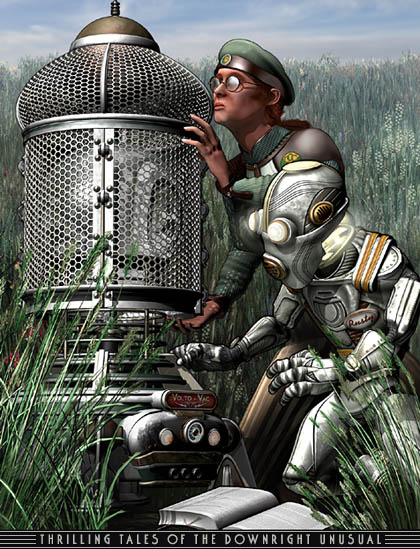 Here at the Secret Laboratory the outside world just can’t decide what season it is. The occasionally balmy day is alternating with near-freezing temperatures. The trees and plants, not to mention the birds, have committed to Spring. I salute their determination!

But you can see from the above that in Retropolis there isn’t any such confusion. In this new illustration for The Lair of the Clockwork Book Gwen and Rusty are hard at work on the Great Plains where something has interfered with their prairie restoration project. I’m afraid you won’t find out what, exactly, or even see this illustration again, until sometime in June. That’s just how the schedule rolls.

Back on April first I mentioned that something pretty neat might be going on, but I couldn’t say just what. Well it really is going on – this weekend, in fact – but I probably still shouldn’t say what it is. I might not be able to say for awhile yet… because it’s one of those things. Still, even secretive neatness is pretty neat. In a secretive way.

This entry was posted on Wednesday, April 20th, 2011
and was filed under Thrilling Tales of the Downright Unusual, Works in Progress
There have been no responses »