Boston Terriers, with ray guns, in rockets: a pair of prints by Brian Rubenacker 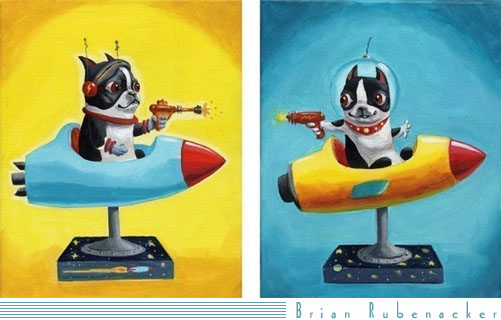 So here’s how I figure this happened. Terriers were working dogs, once upon a time: the well-equipped rat catcher would go out with his dogs and ferrets, which brings the Steeleye Span recording to mind, and between them those little (but fierce) hunters would flush out and dispose of all the rats they could find.

But what were they to do once they’d all gotten rocket ships? Apparently, they decided to play tag until the space rats showed up.

This is a pair of prints by Brian Rubenacker, at Etsy; and if rocket-riding terriers are just the tip of your iceberg, you’ll be happy to know that the same is true over there. Related: another Boston Terrier in an aviator’s helmet.

This entry was posted on Wednesday, April 13th, 2011
and was filed under Found on the Web
There have been no responses »