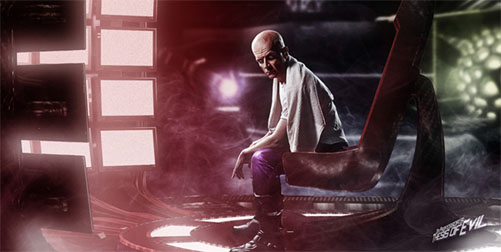 Doctor Professor’s Thesis of Evil is a motion graphics film project that’s the brainchild of a group of mad Finns in a far-northern town that (they tell us) you’d never even find on a map.

It’s the story of a super villain who’s found that super villainy, these days, is more a matter of public relations and media exposure than of the kind of full bore, absolute evil that he was after when he started his career. Evil’s become just another media event: you can imagine his disappointment in this world that bristles with death rays, giant mutant koala bears, and superheroes.

The filmmakers started with a low budget and they’ve made some interesting choices when it comes to figuring out how to get the best quality with their limited resources. It’s (predictably) a combination of live actor photography with CGI… but in order to get the highest quality assets for their production they’ve taken an unusual route that combines very good still photography, computer animation, and the kind of motion graphics techniques you’d more often find in title sequences for television and film.

The result is more striking than you might expect. Since their actor photography is all based on stills they’ve been able to deliver very nice lighting, and they’ve spared no effort when it comes to the costumes and makeup. That still photography is combined with the rendered CGI with pans, zooms and other camera effects that deliver an interesting sense of motion even though the actual motion of the characters is pretty limited. You can get a taste of this with their teaser, and see a bit more about the production at their IndieGoGo fundraising page.

That fundraiser has – as I write this – just 16 hours to go, and they’re currently a ways off from the $8000 goal they’ve set to complete the sound design and post-production for the film. So, you know, they could use a hand over there.

This entry was posted on Saturday, April 9th, 2011
and was filed under Found on the Web
There have been no responses »