Slide scanning, and some of my fantasy watercolors from the 1980’s 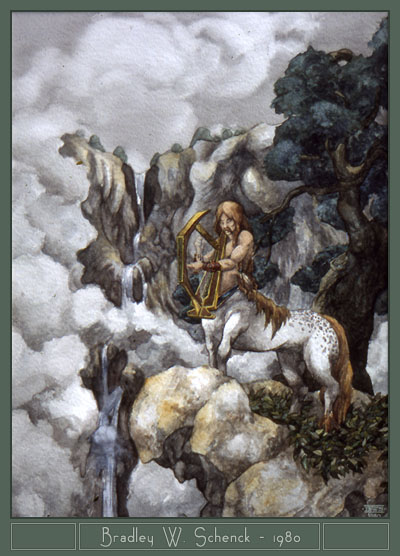 A few days ago while I was lighting a scene in 3DS Max I remembered an old watercolor of mine from the early 1980s. As I was working on that painting – the scriptorium of the Riddle Masters, from Patricia McKillip’s Riddle of Stars

trilogy – I drew a floor plan of the scriptorium to figure out where the windows were, and where the light was coming from.

That’s something I rarely did (I’m not even sure if I ever did it again) but it struck me as pretty smart, in retrospect, and similar to the way I place my lights in a 3D scene.

I guess it stuck in my mind. A week or so back I’d pawed through a lot of old photographs and slides, and I knew I had a slide of that painting. So I fired up my scanner and stuck its transparency attachment into it.

Now, I’ve never used that thing before and it baffled me in five or six different ways before I got it all set up. There’s all kinds of smart, and I think I found one that I don’t have this morning.

I found that slide, and a bunch of others, and eventually I got scans of them. But what a disappointment! There was only one time when I had really good transparencies shot by a professional photographer. These, on the other hand, I shot myself with a 35mm camera. What used to look pretty good in a slide viewer turned out to be so out of focus that it’s pretty hard to get anything decent out of them. I still don’t have a presentable scan of that Riddle Masters painting. 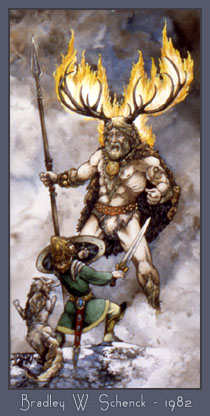 Here are a couple that more or less worked, at least in these low resolutions; some of my old watercolors from 1980 and 1982.

I remember painting the centaur in the summer of 1980, soon after a week spent in Yosemite Valley. (That’s a whole story in itself.) I painted it on some paper I’d bought a few months earlier in Greece. I loved that paper, and I never found anything else that was quite like it. I had to look up the second picture, though – I don’t remember much about it. My notes showed that it, like the centaur, went to my friends and frequent-flying patrons Corey and Lori Cole – but then I crossed that out, so maybe I discovered I was wrong. It’s a mystery.

The only work of mine that’s ever been collectible is from jobs I’d done several years before these, for early role playing games and modules by Wee Warriors and Dave Hargrave’s Arduin. But between you and me… when I did that work I was just a kid, and they’re about what you’d expect from a kid, really. I remember these paintings from the 1980s with a lot more affection, and they’ve aged better.

This entry was posted on Wednesday, April 6th, 2011
and was filed under Works in Progress
There have been no responses »