Thrilling Tales: the Clockwork Book art’s ready… now on to the site revisions! 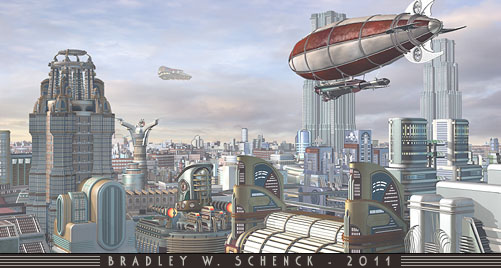 If that’s me, with my faced scrunched up against the window of the airship’s gondola, it only means that I’ve just finished the first illustration for The Lair of the Clockwork Book… which in a remarkable inversion is also the last one I needed to do before I had enough illustrations to start posting the pages at Thrilling Tales of the Downright Unusual. That’s thirty-three, so far, for anyone who’s counting. Well. I guess that’s just me.

Click on it to see it bigger, unless you’re reading through RSS or syndication: the popups, alas, work only at my blog.

So my next step is to work through my task list, making a bunch of changes to the Thrilling Tales site so that it can support this new non-branching story and while I’m at it I’ll also make a number of other enhancements to the way the whole unlikely thing works.

Still on track for the launch of the Clockwork Book story in early February!

This entry was posted on Friday, January 14th, 2011
and was filed under Thrilling Tales of the Downright Unusual, Works in Progress
There have been 4 Responses »

I’m patting myself all over the back right now because I’ve just completed a major overhaul of the display system which is completely invisible to any human but me, but which works *much better*.

The whole point is that there’s no visible change, which is why it seems so wacky to be excited about it :). But the pages will now give Googlebot a lot more to think about.

I also found two things that I did in a really smart way, but had forgotten about, so that some of these revisions are simpler than I’d expected. Go, go, me!

Coming from a programing background myself, I can appreciate the satisfaction of putting something together well, even if it doesn’t show (and *especially* if it catches Googlebot’s eye.. or byte.. or whatever Googlebot has). Go you!

I guess I should have said that the old version worked perfectly well for human eyeballs; the new version just makes sure that bots see the content properly.

Today’s nightmare has been hours and hours of trial and error to make something work – and the final result is just four lines long. That’s about two hours per line :).

But this new thing is still slower than I like and it can’t be cached, unfortunately, so I’ll probably be back on the same problem tomorrow. If it can’t be cached I’d sure like for it to run faster. There ought to be a way… but that’s pretty much what I’ve been muttering all day now, harumph, harumph.