Coming in February: The Lair of the Clockwork Book 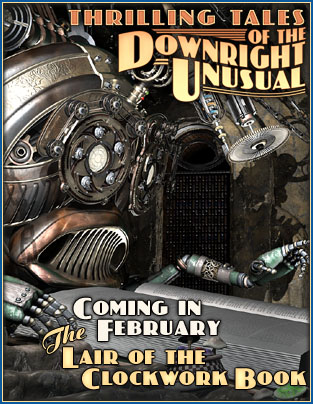 It’s as official as I can make it… without popping ahead to February to check, anyway. But since I’m down to the last six and a half of its first set of illustrations I’m confident that if you check back in early February you’ll find the first of the semi-weekly updates for The Lair of the Clockwork Book at the Thrilling Tales web site. It even says so on the site’s front page, so it must be true.

I should have all 32 of those first illustrations done quite soon. Then I’ll need to put on my web development hat so that I can work through my list of web site changes to support the new linear stories, streamline some story-specific features, and make the site easier to index. That’s a long and complicated story in itself; but I decided to gamble a bit on exactly how smart Googlebot is, and, well, it turned out to be more of a chimp than a mad scientist. Poor old bot.

So ’round about the beginning of February, look for new Clockwork Book pages on Mondays and Thursdays. I’ll have swiveled in my seat at the same time, spending eight weeks on Part Two of The Toaster With Two Brains, after which it’s back to the Clockwork Book for me.

This entry was posted on Friday, January 7th, 2011
and was filed under Thrilling Tales of the Downright Unusual, Works in Progress
There have been no responses »