Lair of the Clockwork Book Update, other thrilling news, and Adventures in Plumbing 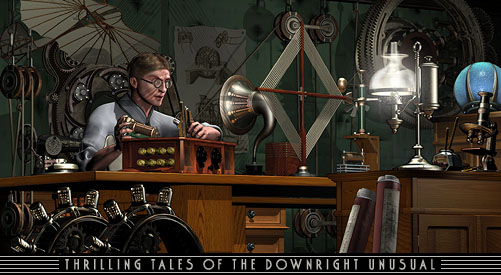 Here’s the final illustration for Osgood Finnegan’s (first) tale in The Lair of the Clockwork Book. It’s yet another laboratory, or a workshop, anyway, in a steampunk setting that predates my Future That Never Was by about two hundred years.

Click on the picture, and behold its relentless embiggification.

I’ll have to leave Osgood to his work in there. I’ve got about ten more illustrations to go before this Thrilling Tale can go live at the web site… then I’ve got perhaps a week of web site updates to do so that the site can support this non-interactive story, and at that same time I’ll make some other housekeeping changes that will make all the stories taste better to Google’s finicky palate, while also enhancing a couple of other things under the hood.

But all that’s grinding to a halt for a day or two. It looks like I have a Plumbing Adventure to take care of first. I’d call it an Emergency Plumbing Adventure, except that I can’t think of too many plumbing adventures that aren’t emergencies. That would be the kind I’d rather have, I think.

This entry was posted on Wednesday, December 29th, 2010
and was filed under Thrilling Tales of the Downright Unusual, Works in Progress
There have been 3 Responses »

3 responses to “Lair of the Clockwork Book Update, other thrilling news, and Adventures in Plumbing”
rainycity1 says:

Happy New Year! Here’s hoping that the plumbing adventures have been successful (although the slaying of dragons may have been involved, I strongly suspect it hasn’t resulting in acquiring bags of gold and jewels…. quite probably the opposite, I suspect…) and that the generation of Thrilling Tales illustrations has resumed.

(and now CAPTCHA has put me into suspense as well, with the announcement of “lorths and…” And what? What could possibly hang around with lorths?)

The only things that could possibly hang out with a lorth would be leasts, lests, and louths. I think it’s Lig Latin.

Yep, things are moving along steadily – this set of illustrations should be done within two weeks, so even with the website-juggling I mentioned I figure the story will start up around the end of the month. Not TOO late, anyway :).

(…btw, Captcha has thoughtfully ended the suspense. Apparently, lorths hang around with “the Blanes”. Sounds like a fantasy story set in middle-suburbia. I guess I could see lorths living in someone’s rafters, I suppose, or maybe the attic. In our house, they probably live in those cobwebby corners of the stairs.)