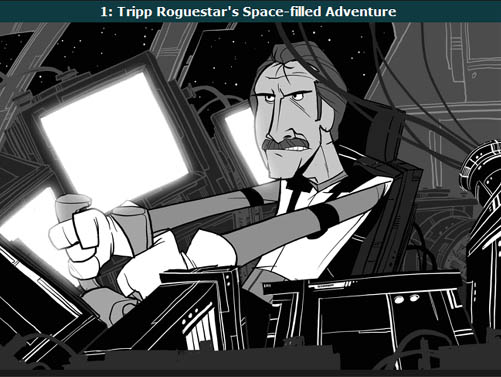 Epicsplosion uses animated gifs for its illustrations and can be a little harder (as in ‘more likely to be fatal’) on the characters than what I do in my stories. What really interests me here is that Tauhid seems to be posting updates to the stories live. I ruled that out because it wasn’t possible for me to keep up with all the possible threads in anything like a timely way. So I’m really interested to see how that works out over there.

Tauhid’s also either bravely or foolishly using the trademarked phrase "Choose Your Own Adventure". We’ll see how that works out, too. I’m in your corner, buddy.

So pop on over and sit in the driver’s seat of Tripp Roguestar’s Space-filled Adventure!

Note that there’s some language there that may not be safe for work or for religious fundamentalists, each of which will have to take its chances.

This entry was posted on Sunday, October 17th, 2010
and was filed under Found on the Web
There have been 2 Responses »

Hi! This is Andrew from Epicsplosion. I’ve been taking on a lot of the web development over there, adding new features like the dynamic archive — did you check that out? There’s a lot more to come, so keep an eye out over the next few months…

We appreciate the nice write-up, and we’ve added your site to our links. I really like what you’ve got going here, by the way. The whole retro-future theme is pretty awesome.

Thanks, also, for bringing the CYOA trademark to our attention. We had already considered changing it, but now we definitely will!

I thought I had looked at the archive, but now I see I didn’t. That’s pretty neat: almost a tree view of the story.