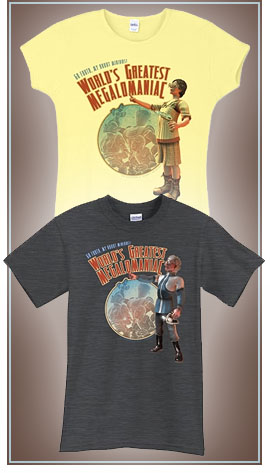 Yep, they’re here: the Worlds Greatest Megalomaniac T-Shirts, in both a Girly Edition and a Manly Edition.

I have to admit that I’ve got some reservations about this. I’m still not sure what would happen if TWO World’s Greatest Megalomaniacs were to show up in the same place; like, for example, well, anyplace.

If two World’s Greatest Teachers show up, well, that’s a little more serious, and some frightening eyebrow arching is likely to happen.

But if two evil geniuses, each bent on world domination, should show up at the same party in these shirts…. I’m just afraid that the fabric of spacetime would distort and rip and something with too many tentacles would arrive from the Dungeon Dimensions.

I can’t wait to find out!

This entry was posted on Monday, October 11th, 2010
and was filed under Works in Progress
There have been no responses »