The Lair of the Clockwork Book, and Other Stories 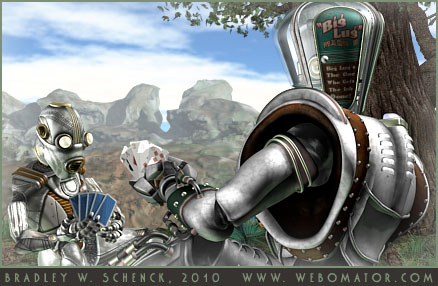 Now if you’re of a cynical bent I know that you’ll look at this picture and tell yourself "That’s it, then: he’s just sitting around in the Secret Laboratory and playing poker with his robots". But that would be so unfair!

This morning I got oh, so close to the halfway mark on my draft for The Lair of the Clockwork Book. And although it is a draft – and has all the problems you expect from such an animal – I’m really pleased with the way it’s shaping up. It all needs polish and there are at least two scenes that need some important rework. But I’m happy so far.

It’s a complicated beast: viewed one way, it’s an anthology of short stories from Retropolis. But all of the stories are tied together by a common thread: so viewed another way, it’s one big, meandering story. Add to that the not-quite-rigid formats for the web version (updates twice a week) and the print version (a frightening relationship between the page count and the cost of the full color books) and the whole thing becomes a sort of ecosystem whose parts need to stay in balance. Which sounds sort of scary, but in fact is kind of neat.

The math for the production schedule is likewise interesting. Once the script is ready I’ll start in on the illustrations. When about two dozen of those are done, the story will go live at the Thrilling Tales web site and I’ll reformat my brain to get back to work on Part Two of The Toaster With TWO BRAINS. When I start to run low on Clockwork Book updates I’ll do another reset and work my way through another two dozen Clockwork Book illustrations. And so on.

If everything works out you’ll see twice-weekly Clockwork Book updates at Thrilling Tales of the Downright Unusual while I still manage to complete Part Two of The Toaster With TWO BRAINS. And there won’t ever be a hitch or delay. Or so I think.

Starting… when? I still don’t know. I hope to start illustrating The Lair of the Clockwork Book sometime in the next few weeks. How long, though, before the updates start at the web site.. this I can’t yet predict. My best guess is that the story will start before the end of this year, continue to its end in Spring of 2012, and then transmogrify into a book. In fact, at least the second TWO BRAINS book should be out long before the complete Clockwork Book sees print.

This entry was posted on Wednesday, September 22nd, 2010
and was filed under Thrilling Tales of the Downright Unusual, Works in Progress
There have been 6 Responses »

6 responses to “The Lair of the Clockwork Book, and Other Stories”
rainycity1 says:

Ooh, ooh, ooh!!!!!! (…sits down and remembers that it’s still a while before the end of the year and that I need to take some deep breaths and calm down…)

Well… I’d kind of like to be more optimistic about the starting date. I just won’t let myself do it 🙂

Just thought I’d let you know. You know, just in case you were wondering. 😉

Well, I’ve completed the setup for the last act but I’m worried that my page count may still be lower than it should be. So right now I’m trying to decide if another story pair would serve any purpose, or if it would just be padding.

Me, I’ll always vote for more stories… presuming that they fit with where you want to go. Sounds like it’s time to put it down for a bit to simmer, and go work on The Toaster for a bit before you decide.

BTW, I just got back from a wedding over in your neck of the woods (University Hts). I hear it snows a bit there.

Because of the way the schedule’s shaped up I won’t be getting back to the TWO BRAINS script until I start in on the illustrations for the Clockwork Book; I’m running behind where I’d hoped to be.

For the moment I’m not worrying about the page count. I do think it’s going to come in short but I can always add some bonus material to the print edition, if I need to. The longer story has kind of taken control now, so I’ll have to judge any more shorter stories by how well they serve the big one. Once I’ve finished the draft I can look at the whole beast and decide how I’m doing on both length and pacing.

And, yep, we do get a bit of snow out this way :). It took me awhile to get used to that but I trained for a couple of winters in Minnesota first, so by the time I got here I was good to go.