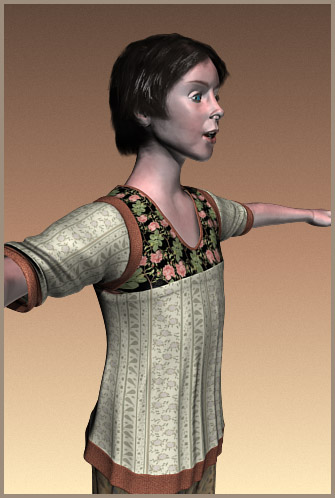 Okay, I got that out of my system. I finished up Tallie’s brown hair, which will end up on somebody’s head someday, but then I wheeled her back into the shop.

As I textured her I started with the fabrics, which led to the complexion, which led to the hair; and when I’d reached the end of that road she wasn’t quite who I thought she’d be when I started. Sometimes that’s good – characters often know themselves better than we know them – but this time, I think, I’d just put the cart before the horse.

So here’s much more the Tallie I thought I was making when I started her. I had an interesting time with her skin tones – it’s so easy for pale skin materials to end up looking dead – but eventually I came up with something that I like (again!) using very much the same techniques as the earlier version. The paler areas have a surprising amount of blue in them, to suggest that translucency you need in skin that’s not undead. So today… this is what I like :).

One other thing I know about Tallie is that she’s quite fond of hats. Happily this hair will adapt to headgear a lot better than the other.

This entry was posted on Wednesday, June 23rd, 2010
and was filed under Computer Graphics, Thrilling Tales of the Downright Unusual, Works in Progress
There have been 2 Responses »

Cute! and spunky! I am amazed. Tallie 2.0 seems like a completely different personality than Tallie 1.0 & Tallie 1.1.

Much nicer.Kind of has that assistant librarian or College-English-Department look about her.