Character Update on Tallie – Hair, Freckles, Vertex Colors and Me

Here’s an update on Tallie, that new character I’ll be using in the Clockwork Book stories. I had some adventures with her hair, which I now sort of like – it’s sculpted with Mudbox, which is something I haven’t done with hair before. I just about always do some retouching on my characters’ hair, so my goal was to come up with something that’d nearly work.

Which might be a larger lifetime goal than I realized when I started to type that sentence.

Anyway, one of the things I like best about Tallie is the way I constructed her skin material. It’s based on two copies of a SymbiontMax material ("Human"). The first skin material’s pale, while the second one’s freckled.

I’m masking between those materials using vertex colors. You can see Tallie’s vertex colors in the lower left image.

All the heavy lifting for the vertex colors was done by baking in the lighting from an overhead light source. (In Max, that’s done with the Assign Vertex Colors Utility.) I positioned a directional light so that it cast light where sunlight would. That way Tallie’s more tanned, freckled skin tones show up just where more tanned, freckled skin tones really happen. I touched up the vertex colors around her throat and on her hands, but other than that it’s a pretty simple simulation of the way her skin would really be affected by the Sun. Neat!

Then a painted material gets masked on to affect her lips and eyebrows. But apart from those details her skin’s completely procedural. 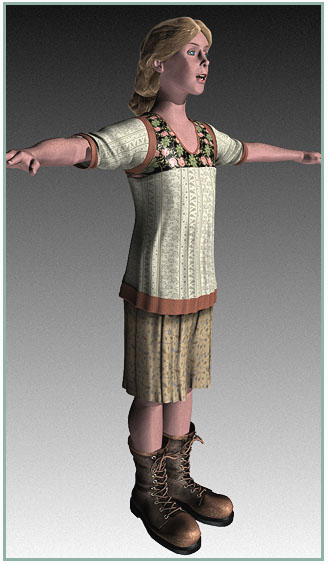 Now, I regret to say, I have to skin her to a skeleton. That’s the part of character work that I always dread. But first… the lawn! I dread yardwork slightly less than character skinning. 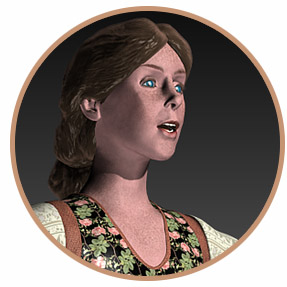 This comment interested me enough that instead of skinning the character (which I know sounds awful; that’s just what it’s called) I’ve been modifying her ridiculously complex hair material to see what kind of brunette Tallie would make. I find that I also sort of like this version, and maybe more than I sort of like the original one.

I also established that the best example of a brunette (brunet?) in Trapped in the Tower of the Brain Thieves is wearing aviator’s headgear, so you never actually see his hair.

This entry was posted on Monday, June 21st, 2010
and was filed under Computer Graphics, Thrilling Tales of the Downright Unusual, Works in Progress
There have been 3 Responses »

Found your website through Girl Genius and am having a wonderful time exploring all the ins and outs. Tallie is lovely. One thing that strikes me (as a girl geek-type) is the 1) ratio of men to women doing interesting things (e.g., mad science) and 2) the lack of brunettes. Is our hair color harder to color effectively? (It’s the traditional ‘I want to buy a picture of someone who looks like me’ syndrome). All of that aside, thanks for all your hard work!

It’s funny you should say that – originally I was sure Tallie would have black, straight hair, and I’m still not sure she won’t before I’m done. But as far as color goes I’ve always had more trouble with light colored hair, with the tools I use; it’s very hard to get really believable highlights – for me, anyway – on blonde or light brown hair.

So of course now I have to try to think of anybody I’ve given real dark brunette brown hair… and, hmm, I’ve definitely leaned toward auburn and black. I have no idea why that is!

I’ll admit I consider girls with black hair in the category of ‘brunette’. You say they’re out there somewhere? I’ll have to continue prowling your web site, looking for them. I seem to have missed them, but truly, the hunt is part of the fun.