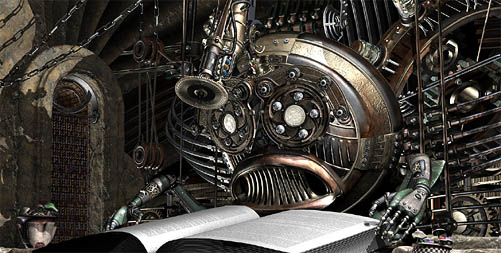 As thunderstorms, ice cream trucks and even earthquakes (in Ohio?) do their will outside the Secret Laboratory I’ve been working away on the Clockwork Book and its room – you can click the picture above to embiggify it.

It’s come quite a ways, with its potted mushrooms, its beaded curtains, its palatial carpet and more pulleys and gizmos than ever before. I still have to work on the opposite end of the room, but I’ve been diverted by working on the Book’s assistant. Because even though it doesn’t strictly

need one, the Book has always had an assistant. She’s not what you might expect given the Book’s ominous face and alarming reputation. Life’s just like that. There’s a work in progress shot of Tallie below.

But first, a reminder that the Clockwork Book and his room are relying on my Kickstarter fund drive to launch the next stage of Thrilling Tales of the Downright Unusual… more than ever, in fact, since I’ve now had to replace my ailing monitor. That wasn’t something I’d planned on, and it’s left me on that side of the ledger that is more red than not. It’s sort of flashing, too, which I think must be a bad sign.

I resolved not to worry too much about the Kickstarter drive as we neared the halfway mark. Although the pace of new backers had dropped off a bit I could see that we were running about even when I compared the percentage of funding with the percentage of time.

That’s no longer quite the case and so I will soon Actually Be Worried. The Kickstarter fund drive stands to make a big difference to the success of the Thrilling Tales (not to mention the success of my refrigerator) and since I haven’t sold actual hundreds of books (yet!) that fundraiser is likely to be a big part of how I take the project through the months ahead.

So if you might become a backer, please do! And if you can’t, or if you already have (thanks!) I’d sure appreciate anything that you and your tweets and your Facebook pages might do to spread the word about Thrilling Tales of the Downright Unusual and its Kickstarter drive. It, by which I mean I, could sure use the help. 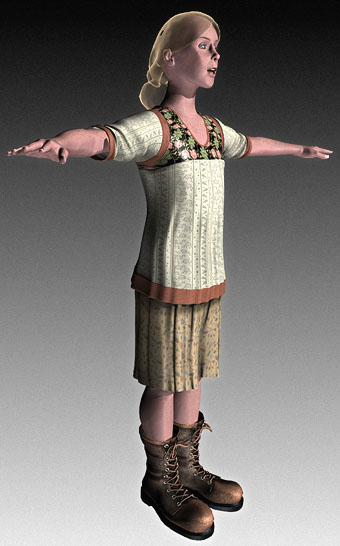 Anyway, here’s that work in progress image of Tallie, the Clockwork Book’s assistant. If you think she’s charming and cute… remember what you shouldn’t judge by its cover. Tallie is not to be trifled with.

I’ve rendered her hair as a strange ghostly mass not because that’s neat, although I think it is, but because so far I’ve just roughed in the mass of her hair and that’s what I’ll be working on next. I thought I’d give it a shot with some sculpting software this time.

So thats it for now. Remember Kickstarter!

This entry was posted on Saturday, June 19th, 2010
and was filed under Thrilling Tales of the Downright Unusual, Works in Progress
There have been no responses »