Ten Questions from the World, Ten Answers from Felicia Day

Reddit solicited questions for Felicia Day to answer, and that’s what she does, right here in this video. The questions range from the thought provoking to the baffling (see #8) and the Incomparable Miss Day fields ’em all.

If you’ve somehow missed her web series The Guild or don’t realize that she was the all-singing, all-laundering female lead in Dr. Horrible’s Sing-Along Blog

, well, shame on you, and you really ought to thank me now for fixing that.

She’s the Web’s poster person for doing what you really want to do even when nobody knows they want you to do it. If I could have an awesome niece she’d be just like Felicia Day.

Good stuff here for anyone who’s interested in creating and promoting their work on the Web… and great material for designing Imaginary Awesome Nieces.

This entry was posted on Friday, May 14th, 2010
and was filed under Found on the Web
There have been no responses »

John Scalzi Threatens the World With My Title-O-Tron 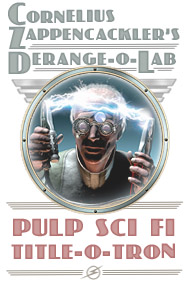 So as I write this, Thrilling Tales of the Downright Unusual has seen almost 39,000 page views since its launch, just over two weeks ago.

I’ll take all the credit I can for that but the ball didn’t really start rolling until the site was mentioned at Dark Roasted Blend and Mental Floss. Nice!

As you might expect the Pulp Sci Fi Title-O-Tron is the most popular link and the most popular page, too. It’s been fun to watch the incoming links appear and to see where they’re coming from – often from conversations on forums.

I hate to pick favorites, but I will: there’s a fun conversation going on at Metafilter where people are posting random titles they like… to the point where they’re mapping out an actual series based on the titles. They seem to like a "Midshipman" trilogy that ends tragically with Lament for the Celestial Midshipman. But hey, folks, it doesn’t really need to end there: because with more titles like Gods of the Lieutenant of Phobos and Avenged by the Captain of Twilight there’s a clear path for promotion.

But this is why the Metafilter page stands out for me: John Scalzi chimed in with this:

I’m going to take one of these titles and write a science fiction story out of it.

SHUT UP I TOTALLY WILL.

But which would it be? The Dancing Professor of the Worlds? Pursued by the Quivering Accountant? The Night of the Tentacle of Terror? or… The Song of the Accordion of Doom?

In other news, I’m happy to say that there’s been some response to my Kickstarter fundraiser for the Thrilling Tales. It may look like a small percentage so far… but at the rate we’re going we can certainly meet the goal. If, you know, we do keep going at that rate. So remember: Long arms and shallow pockets beat short arms and deep pockets!

This entry was posted on Sunday, May 9th, 2010
and was filed under Thrilling Tales of the Downright Unusual, Works in Progress
There have been no responses »

The Thrilling Tales project is a lot like a web comic – the content’s available for free on the web or for purchase as printed books. The biggest difference is that because the stories aren’t linear I can’t post updates a couple of times a week. And going by Trapped in the Tower of the Brain Thieves, those updates will be months apart.

For that reason I’m planning to add linear illustrated stories with updates once or twice a week. Although that will delay the big updates even more, it’s about the only way the site can build up its readership.

Of course… that means that the next Toaster With Two Brains update will be even later than it would have been otherwise. And on the practical side I’ve been supporting my many months of work on the Thrilling Tales with nothing but the sales from my web sites. Out of the nine months beginning in July 2009 there was just one month when I worked on anything else.

So here I am, gearing up for the next illustrated story – which now is two stories, one interactive, and one linear – while the web site is still percolating across the web and trying to draw an audience. This is where a corporate startup would look for what’s called "bridge financing" – investment to tide the company over until it grows into its market and can walk on its own tentacles. I’m not a corporate startup, of course, and so I’m rolling out a fundraiser at kickstarter.com.

END_OF_DOCUMENT_TOKEN_TO_BE_REPLACED

This entry was posted on Thursday, May 6th, 2010
and was filed under Thrilling Tales of the Downright Unusual, Works in Progress
There have been no responses »

Yikes! An in-home recording of the "Diva Dance" from one of my favorite movies, "The Fifth Element".

This seems so punishing. It reminds me that I once saw an analysis of Cab Calloway’s vocal range. The conclusion was that it wasn’t possible. Go Cab! And go Laura, whoever you are.

This entry was posted on Monday, May 3rd, 2010
and was filed under Found on the Web
There have been 2 Responses »

New deals on my Archival Prints, and a shipping special for them

The prices on all my archival prints have just been reduced and a lower flat rate shipping special is on for the next 90 days.

DeviantArt (which prints these for me) has just done a soup-to-nuts reorganization on their prints program. That means that you and I each get a better deal! The price reductions vary by print size but they’re usually 20% to 33% lower. So for example one of the big 20 x 30" prints that used to be priced at about $70 is now $48 … while the smaller ones like my new Trapped in the Tower of the Brain Thieves prints have dropped from around $61 to $40. Nice!

This entry was posted on Sunday, May 2nd, 2010
and was filed under Works in Progress
There has been 1 Response »