Stalking Made Me Who I Am

Sometimes, when I see the increasingly litigious ways we deal with one another, I think about the things we’ve lost. Oh, I don’t mean disputes over property lines or breach of contract or any of that. I’m thinking about the way we now use law to set our personal boundaries and criminalize bad behavior.

It’s not that I don’t despise things like sexual harassment. In fact that’s one I especially dislike. Sexual harassment is the sort of thing that makes a thinking man angry. I mean, a few overgrown infants make the rest of us look pretty bad by association, just because we share the same kind of plumbing.

But as we’ve relied more and more on labelling behavior, and on laws to regulate it once it’s labelled, and on punishments for it once it’s regulated, we’ve lost some of the skills that people need just to deal with each other in groups. Skills that we actually used to have.

A lot of bad behavior is more unfortunate than it is criminal. Once upon a time we’d have dealt with it through deflection… or by hauling the offender out behind the tobacconist’s and knocking out one of his teeth.

Case in point: stalking. Once upon a time some forms of stalking were not only permitted. They were necessary. I wouldn’t be here typing this if my grandfather hadn’t stalked my grandmother. And there wasn’t a creepy thing about it.

My grandfather – who, later in life, appeared in the terrifying photograph above – first saw my grandmother on the Vaudeville stage. She would have been about sixteen at the time, right about the time her photo below was taken.

This was the musical comedy act of Noodles and Elsie Fagan. My grandmother Blanche and her sister were each part of their parents’ act. Family legend has it that Grandmother even managed the act from the age of eleven because everyone agreed she was the most sensible one of the bunch.

So when Reuben Smith saw her on that stage she’d have been singing, lit romantically by the stage lights. And that did him in. The moment he saw her he decided that this was the girl for him. 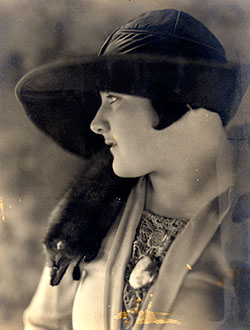 But what to do? In that day and age you wouldn’t get anywhere by approaching a young woman and introducing yourself. You’d do more harm than good. An action that forward was an implied insult: by acting improperly, you’d be suggesting that she was improper and that, as they say, would be Game Over. Out behind the tobacconist’s for some quick dental surgery, bub.

One of the interesting things about what my grandfather did do was that it’s closely paralleled in Robert A. Heinlein’s Time Enough For Love, in an episode set at about the same time. Lazarus Long, in that story, travels back in time to meet his own family. And he does just what my grandfather decided to do on the night he saw my grandmother on Vaudeville and followed her all the way from the stage door to her front door. In the dark of night. Stealthily, I bet.

Grandfather started to hang out in her neighborhood. He started shopping there; he ate his meals in the neighborhood restaurants; he hung out there long enough to make some friends, and once he was a fixture in the neighborhood, someone introduced him to my grandmother. The rest, if not history, is my history. And – probably because of the way things turned out – even that bit of stalking under the streetlights doesn’t seem sinister. It seems charming.

I’m fascinated by the fact that Heinlein had his character adopt the same strategy because it suggests that my grandfather wasn’t the only one. I really wonder if someone Heinlein knew in the 1920’s hadn’t told him a family story a lot like mine.

Chances are that if my grandfather tried this clever plan today he’d end up in jail, and as a result there would be no me to tell his story.

And when I think about those stiffer, more formal days I also think that when we hand over our personal relationships – even the unpleasant ones – to the law… well, we’re formalizing those things in a different, impersonal way. Society hasn’t abandoned its rules and manners. It’s just delegated them. How weird is that?

This entry was posted on Thursday, May 20th, 2010
and was filed under Can't Stop Thinking
There has been 1 Response »

One response to “Stalking Made Me Who I Am”
Michael Goodman says:

My grandfather did very similar things in the early 1920s. Love the art deco.