Kickstarter Names My Thrilling Tales Fundraiser Their “Project of the Day”! 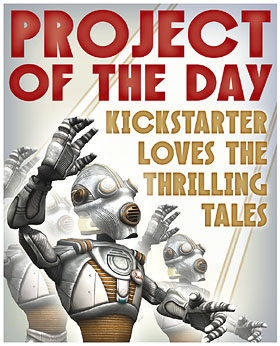 Hey, what a great surprise!

As I prowled through the Thrilling Tales stats this morning I found that Kickstarter has named my fundraiser their Project of the Day!

That’s wonderful news for all sorts of reasons. The Thrilling Tales fundraiser has gotten off to a good start in its first nine days – we’ve got nearly 20% of the target amount pledged and plenty of time, at that rate, to meet the goal.

Of course I’m a worrier, so I’m thinking grimly ahead. As far as I know, this week saw the last of the big site links to the Thrilling Tales site and so I expect my traffic there to taper off over the next couple of weeks. Naturally I don’t know about every incoming link, so something big could still be on the horizon. But, like I said, I’m a worrier and so I figure that the huge boost in traffic I’ve seen at the site has already peaked. That’ll make it harder in the coming weeks to get more excited eyeballs looking at the Thrilling Tales, buying books, and pledging to the Kickstarter drive.

That hasn’t converted to a lot of sales or support since these are mainly casual browsers looking at the Title-O-Tron, or even reading the first story… but then moving on. Most of my brain expected that – the whole idea behind a project like this is to offer free content as a way to draw in lots of visitors, and people who are happy to find things for free don’t necessarily become people who want to support those things. Like I said, most of my brain expected that. It’s currently explaining the facts of life to the rest of my brain, which was more optimistic. It’s a goofy, romantic thing.

So anyway it’s great to be featured by Kickstarter – the fundraiser is going to make a big difference to the next phase at Thrilling Tales of the Downright Unusual… so long as we reach the goal. I’d cross my fingers but I’ve found from experience that’d make it really hard for me to type this.

This entry was posted on Saturday, May 15th, 2010
and was filed under Thrilling Tales of the Downright Unusual, Works in Progress
There have been no responses »