There are some technical features on the site that I couldn’t really work on without actual content (and boy, have I got that now!) There’s also a feature that I decided to add after I’d started in on the art. You can see that at the upper right: big pop-up versions of the illustrations.

That in itself wouldn’t have been difficult except that I had to retrofit the existing pop-up window code – not written by me – to be much more flexible. I was already using these windows for big info panels about items you pick up in the course of the story, and I plan to use them for the save/load panels, too. So I had to teach the system to be happier about taking content in different ways and to accept the dynamic content that is 90% of what happens on the pages. 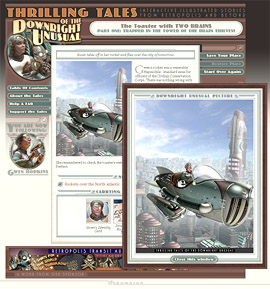 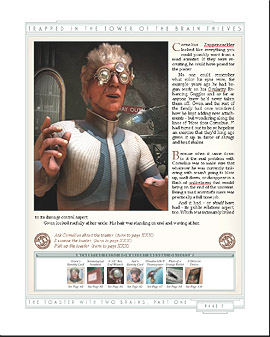 The surprising thing is that although the technical tasks weren’t easy, they haven’t taken much time at all, now that I look back on them. Still some more of that stuff to do, but it’s going well.

At the lower right is a working layout for the book pages. Just arriving at a basic layout that looks great and works across all those pages is more difficult than you might expect.

Because book pages (unlike web pages) are all the same size. I need to present a certain amount of information like the items and options shown across the bottom of the page for each node in the story. In a few cases I’ll need to go to a two page spread – I’ve always known that. But I want to keep those to a minimum so there’s a lot of trial and error with the page layout to see how it works for a variety of story nodes. Inevitably there are some that are just slightly too long – way too long would have been better. Slightly too long is complicated.

Anyhow, that process is nearly done. Soon I’ll be laying out all of the pages for real. And then – because in its way this is an interactive book – I’ll actually have to test it. Strange but true.


Update: the Thrilling Tales of the Downright Unusual web site is now alive (alive, I tell you!) at thrilling-tales.webomator.com

This entry was posted on Wednesday, March 24th, 2010
and was filed under Thrilling Tales of the Downright Unusual, Works in Progress
There have been no responses »