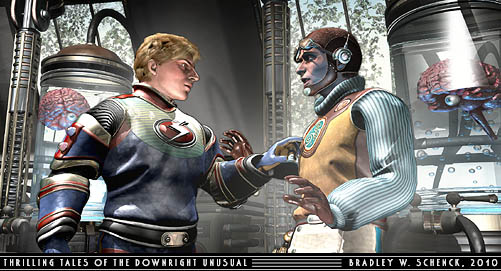 Still going, still going… my goal for the week is to finish both the Thrilling Tales trailer and the redos and post work on the story illustrations for Trapped in the Tower of the Brain Thieves.

This was probably the last of the more difficult redos for existing illustrations. Probably. Most of them just need some adjustments to contrast and brightness: that might have been needed anyhow, but the matte paper for the book tends to dull down the contrast of the images and as I’ve seen, that means they need some more lovin’. I stand a pretty good chance of getting through the rest of them in the next couple of days.

The trailer may be finished. I’m not sure yet. There are a couple of things I might like to try differently but the thing that I like least is something that it would be very difficult to change, because it has to do with the pacing and length of the period musical score. That isn’t flexible. About all I could do would be to try a completely different score (after finding one I could use!) and that would lead to a brand new complete edit and, I’d guess, at least a week of new work. This idea does not excite me. So I watch it, and brood a little bit, every night. We’ll just see.

If I meet this week’s schedule, then, I can move on to finishing the web site – several technical things to do there, along with adding non-story content – and I’ll also get to work on the book layout for the print edition. Proofing and finalizing the book is likely to be the real bottleneck. I’m still aimed at a launch for the Thrilling Tales web site before the end of April, and I believe I’ll get there on time.

I’m not posting often here just now because I’m not thinking about much of anything else. Talk amongst yourselves. Confer. Relate.

This entry was posted on Thursday, March 18th, 2010
and was filed under Thrilling Tales of the Downright Unusual, Works in Progress
There have been no responses »