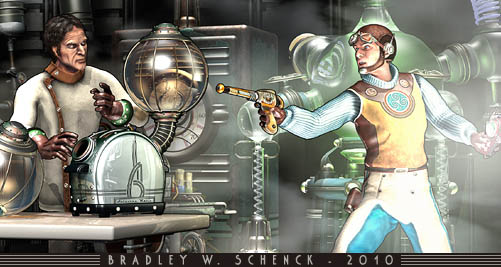 The rayguns have come out as I near the end of this batch of illustrations in Doctor Rognvald’s lab – and when these are done I think I’ll have nearly reached the "light at the end of the tunnel" stage. Almost.

When I guesstimated that Trapped in the Tower of the Brain Thieves would need about eighty illustrations… I was pretty much exactly dead on. Amazing, seeing as how that involved arithmetic and everything. Next time I’ll track the exact number as I refine the script. It was hard this time because some of the story nodes shared the same illustrations and I didn’t keep a tally of those as I went. Anyway, like I said, eighty pictures was about right. Sixty seven down as of this morning.

I got to thinking last night about Kickstarter. That’s a fundraising web site where a lot of musicians and artists are raising funds for their projects. I’m toying with the idea of trying that when I start Part Two of the story.

The whole thing ends up being a bit like a Public Radio fundraiser in which ever-neater premiums go with the ever-higher contributions. You can see that there’s some math involved there (egad!) to make sure that the total raised, minus the cost of those premiums, still gives you the funds you need. And if the cost of the premiums is high then the project’s funding has to be higher… which makes it harder for the project to reach its goal.

There are some Kickstarter anecdotes here at the Whitechapel forums. Fora. You know what I mean.

And you need an invitation to start a project, so when the time comes I’d have to scramble around on the web looking for one. But it seems like there’ s some potential there. Still thinking.

This entry was posted on Tuesday, February 9th, 2010
and was filed under Thrilling Tales of the Downright Unusual, Works in Progress
There have been 4 Responses »

As a huge fan of ALL your work, there’s something about this piece I especially love; the way the intense light plays on the right, and the artistic use of the black “holding lines” (stroke) around the foreground elements / characters to help them pop.

Your work continues to be at the highest level, congrats BWS!

Wow.
In my mind the previous standard of “hardcore workaholism” was “32 coats of Teal” painted on a 57 roadster ….but you have raised the bar.

That’s just pure unadulterated dedication. My hat’s off and the moonlights shining on my bald head.

@Digger – It’s sort of funny how the things I like least in some of the earlier illustrations are bits where I did fancy shmancy things like render passes with specular blooms and whatnot.

What’s working best in the series are much simpler effects like outlining and masked smoke. I think that’s because they look more like illustrations from way back when – anything that grounds these in the source material just works better.

And I am also really liking that intense light from the device in Nat’s left hand, there – that’s been an element in the last half dozen pictures and I love the harsh highlights.

@Dante – I never said all 67 were quite as nice as this one :). I do have to go back and retool a few of them when I’ve “finished” all of them. There are a couple I’ve done more than once already and they’re still not really there yet.

It’s been a long haul, but I’m getting there.