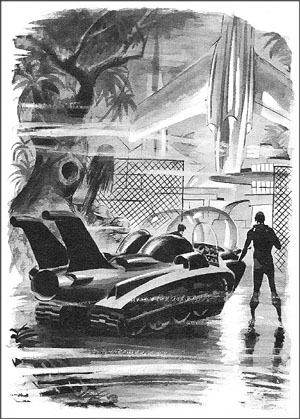 Wood’s one of my favorites among the EC comics artists although I got to know his work later, through his work for the Warren magazines and for Marvel comics. It’s great to see these illustrations for Galaxy. They’re a real departure from his distinctive inking style: "Make everything black that should be black; then make some more stuff black that shouldn’t be black." (That’s my paraphrase, but I think it’s pretty close.)

This entry was posted on Thursday, February 4th, 2010
and was filed under Found on the Web
There have been 2 Responses »

Can anyone date this particular drawing? Does anyone know of other drawings with this particular spaceship?
There is a lovely paper model of this same ship – see my website, page Science Fiction.

The original article I linked to here dates this illustration at 1958.