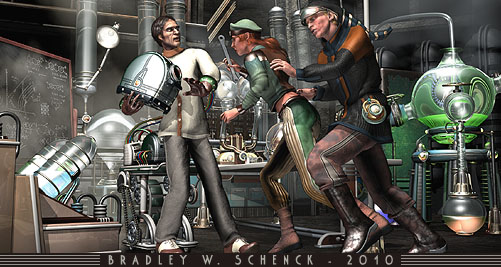 As Gwen and her wrench have a strange interlude in the laboratory of Doctor Rognvald, I seem to be about 75% through with the illustrations for Part One of The Toaster With TW0 BRAINS. That’s nineteen more pictures to go (ten of them set here in the laboratory) plus a couple of redos, and then a little more mechanical work on the Thrilling Tales of the Downright Unusual web site before it’s ready for the public.

What a long haul!

As I’ve worked on this first part – Trapped in the Tower of the Brain Thieves – I’ve learned some things about what will and won’t work well in the format. And about scale: the density of the illustrations is nowhere what you’d find in a comic, but there are still a lot of pictures and they do take time. TWO BRAINS will likely continue in a very similar way but in the future I may try to do shorter story segments just to make sure that the site gets more than seasonal updates.

For reference: I spent a week on the script. Although I’ve edited it some since then, it was pretty well settled at the end of that week. But in order to finish the eighty-odd illustrations I’ve kept at it almost continuously since late August. So at that rate even "seasonal" is a bit optimistic, isn’t it?

And I’ve wrestled a bit with style since at the beginning, knowing what a long road was ahead, I was determined to work out ways to get the pictures done speedily. I’ve pretty much abandoned that by now and I’m more in my usual mode of "It’ll be ready when it’s ready". But there just has to be a middle ground for something of this scale.

Anyway I do hope it works out between the free web versions and the printed book versions – and that I sell a few of the books! The great thing about making so many illustrations is that there’s a handful of them that I want to redo at, say, 18 by 24 inches for posters and prints. Along with preparing the print version and working on Part Two…!

This entry was posted on Sunday, January 31st, 2010
and was filed under Thrilling Tales of the Downright Unusual, Works in Progress
There have been no responses »