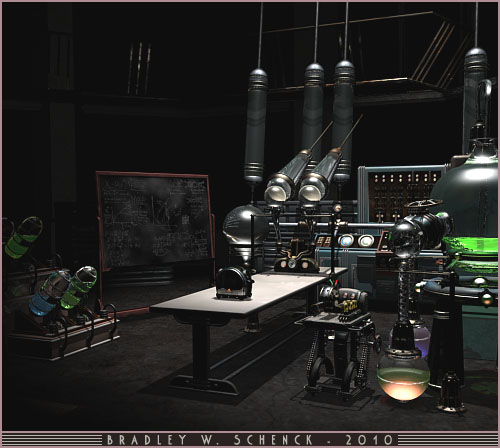 Here’s where ‘ve been for the last… oh, I have no idea. It’s the laboratory of mad Doctor Rognvald, creator of the Toaster With TWO BRAINS. It’s the second mad scientist’s lab I’ve built for this Thrilling Tale. The two are quite different.

That’s because Cornelius Zappencackler’s lab is sort of a pleasant place for tinkering – one that you or I might like to work in. Oh, you’re right – some of the things he gets up to in there do sort of threaten to destroy the planet. But he’s an affable old gent, and he means well.

Okay. Maybe "well" isn’t the word I was looking for. But he doesn’t mean harm. It’s just that sometimes harm happens anyway.

But this! This is a laboratory that you or I might like to tinker in only if we were evil geniuses! This place is a textbook example of the kind of room where you Meddle In Things That Man Was Not Meant To Wot Of! This is the sort of lab where every now and then you just have to throw your head back and crow: "It’s ALIIIIVE!"

I’ve been having a great time with the glassware and instruments. This is just the point where I’ve dropped a real light source into the scene so I can get an idea of what to do next; but it’s well on its way… it’s…. nearly…. aliiiiive!

See what I mean?

This entry was posted on Tuesday, January 12th, 2010
and was filed under Computer Graphics, Thrilling Tales of the Downright Unusual, Works in Progress
There has been 1 Response »

I want a room like that – only full of retro electronics with the fluids restricted to the espresso machine.