In Progress: An Ominous Hallway of… Tubes 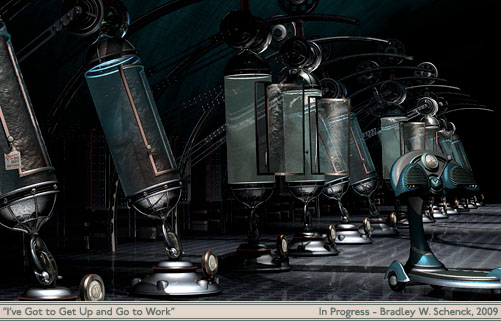 So this whole “women in tubes” thing was preying on my mind, and apparently my mind wasn’t careful enough down by the waterhole… judging by this in-progress scene.

What I’m liking in here (though you can’t really see why, yet) is that it’s a setting that’s guaranteed to seem ominous and sinister, but it won’t be. In fact it’ll be sort of cozy, in an unlikely way. And so, much more Retropolitan in character.

Just a pretty rough layout so far, though I have been experimenting with the lighting because that’s going to be pretty important to the picture. It’s a slow rendering already even though I’m not including the more distant tubes that’ll stretch down the hallway, which will just get composited in at the end. Many lights. Many reflections. Much glass.

I’ve already chosen a title, which is the name of a 1936 song by Milton Pascal and Edgar Fairchild.

This entry was posted on Sunday, July 12th, 2009
and was filed under Computer Graphics, Works in Progress
There have been no responses »