Go Hero has posted pictures of the final versions of its classic Buck Rogers action figure, along with a replica of the little ray gun that could – Buck’s Atomic Pistol, probably the first huge merchandising success for American popular culture. For full information, follow this link and click on “Shop”.

The little guy’s got loads of articulated and removable bits, including a bubble helmet and his own miniature pistol, and there are even glowing LEDs in the jet pack. (Buck originally used a “jumping belt” instead, which was made of the lighter than air metal called inertron; but jet packs did come along in the newspaper strips a few years later.)

It’s nice stuff, though I’ll warn you that it’s not priced for the faint of heart.

In other vintage Buck Rogers news, it looks like Hermes Press is starting a complete collected version of the daily and Sunday newspaper comic strips. Dailies and Sundays will be collected separately. 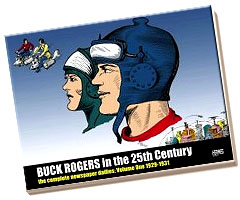 ‘s scheduled for September, 2008. It’ll feature two years of the daily strips and an introduction by Ron Goulart, in hard cover. More daily strip collections are to appear every five months with collected Sunday comics pages appearing once a year.

This entry was posted on Friday, July 11th, 2008
and was filed under Found on the Web
There have been no responses »