In Progress – an airship of the retro future 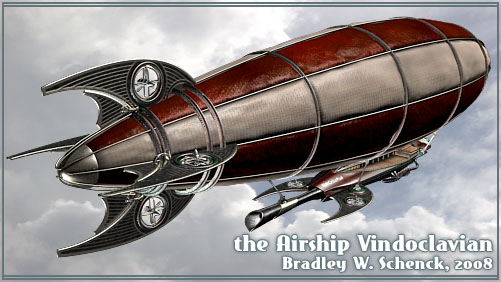 Here’s a test rendering of the 3D model I’ve been working on – it’s the Airship Vindoclavian, a lighter than air dirigible that incorporates some steering propellers from an old Modern Mechanix & Inventions cover and an exoskeletal frame that’s unlike any that were ever used in zeppelins (German zeppelins used internal, four-spoked frames, while the US Navy’s dirigibles used a similar, but three-spoked frame that the German engineers disapproved of*).

That frame and another aspect of the design are really intended just to make the nature of the ship more apparent… so I have to figure out what crazy notions led to those changes. Because I’m not a rocket scientist, of course – just a rocket artist.

*given the relative failure rates of the US and German dirigibles, the Germans seem to have had a point there.

This entry was posted on Tuesday, June 24th, 2008
and was filed under Computer Graphics, Works in Progress
There have been 3 Responses »

3 responses to “In Progress – an airship of the retro future”
dirigible says:

pretty cool – like the retro styling i use soilid works

Very nice. I like the texture on the fins. The shape makes me think of the Polaris space ship from old sci-fi films.