The Wrong Buck Rogers to Return to Movies – Good? No, just Bad and Ugly

Conflicting and confusing reports are emerging about a new Buck Rogers film project. Some of the releases claim that Frank Miller’s to direct – which could be a great thing – but that’s apparently either not true or not certain. There’s a bit of other information that runs through the coverage, though, which makes me want to run and hide. 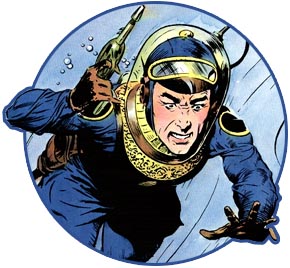 It’s this sort of thing:

The cheapness of the low-budget effects will be a running joke in the movie, which will retain the campiness of the 1980s TV series Buck Rogers in the 25th Century starring Gil Gerard. (from IGN)

Okay, what’s right about that sentence? Answer: the grammar.

The Variety piece is less alarming and seems to have checked its facts, which was apparently beyond IGN. The IGN version’s been regurgitated in loads of places already, including the io9 blog.

Any new incarnation of Buck Rogers that even admits there was a cheesy Gil Gerard version will leave me crying in my beer, mainly because it’ll be nigh impossible to try to get it right again for a couple of decades afterwards. “Getting it right”, admittedly, is a pretty subjective aim – but this, which sounds so much like Sci Fi’s Flash Gordon reboot, will not be it.

A pall of silence falls over the retro-future, and the people mourn.

This entry was posted on Friday, May 9th, 2008
and was filed under Found on the Web
There has been 1 Response »

One response to “The Wrong Buck Rogers to Return to Movies – Good? No, just Bad and Ugly”
Jeff Doten says:

I appreciate your use of the Frazetta image.