Blogstipation- It’s All in a Good Cause, Though 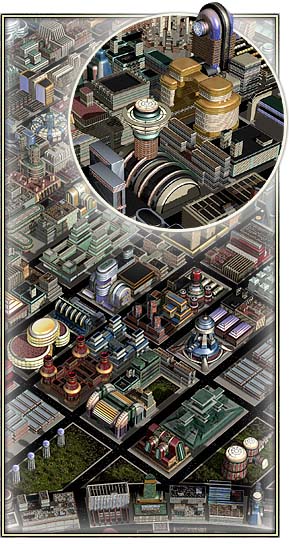 All’s been preternaturally quiet around here, but there have been good reasons for that. I’ve been preoccupied with a couple of things that have kept me off the blog, you see.

At left is one of those distractions. It’s a closeup, or at least closeup-ish, view of the City of Nova York from my Empire State Patrol comics project – the city is the largest set for the story and I started it nearly two years ago. I’m hoping that I might be finished with the whole of Manhattan Island in early July, on its anniversary.

This is what I’ve called the “medium resolution” version of the city – the highest res at which the whole city would be visible – and it’s divided into large sections. The idea was that I’d use my low resolution version in the distance, and this medium resolution version closer in, with the addition of some “hero buildings” for the truly close-up bits that might show in a given image. Since I’m now on a much manlier computer than I was when I started I’ve begun to wonder whether I’ll need the low res version at all. We’ll just have to see.

One thing that’s typical of something that takes this long is that I may need to go back and rework the earlier sections of the city. The newer blocks are more detailed and, though they use the same materials as the old buildings, they don’t quite match. I’m working on a large number of rectangular blocks that make up Nova York’s outskirts. At the center of the city – which occupies the area of what’s now Midtown Manhattan – the streets are laid out in concentric circles that ring the Empire State Building. That’s the one remaining bit of our old New York.

My other recent distraction is an advertising campaign for my T-Shirt sites, Retropolis Transit Authority and Saga Shirts. I’ve had wonderful success this time around by advertising on webcomics and blogs – but online advertising is often a handy way to bleed money faster than you can count it, so the ads have taken quite a bit of my attention.

This entry was posted on Friday, April 25th, 2008
and was filed under Works in Progress
There have been no responses »